ITS Based Transportation Information Provision 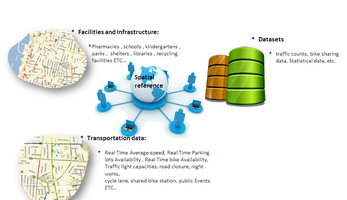 This measure provides a unified picture of traffic conditions incorporating data from events that may delay or slowdown movement. There are multiple data sources that contain valuable information. The measure integrates this information creating a platform that provides the aforementioned unified picture.

The platform – Rav Aviv – is open free of charge to all users, and can be used as a decision support system for both the individual traveller and the traffic operator.

Focused information regarding roadworks and mass public events integrated into the relevant processes conducted through Rav Aviv enables preplanning for these events, preparing appropriate signal programs for scenarios derived from the information and activating them automatically at the right time.

The specific measure level objective was to reduce travel times in the vicinity of events by 5%.

The Rav Aviv open data platform was developed, including system architecture and data integration.  A number of activities were carried out regarding the use of the provided transportation information, such as:

In addition, to highlight the usability of the data provided by Rav Aviv, an app development competition was held as a part of the urban transport Hackathon from 30-31 October 2014 with 150 participants.

The measure aimed to elevate decision making of both traffic managers and road users. Therefore the measure was evaluated by: 1. comparing the frequency of preplanning (dedicated signal programs and operation schedules) for scheduled events before and after the integration of the information into Rav Aviv; and 2. Conducting route choice experiments around planned events to assess the degree to which route choices based on traffic condition information decreased travel time.

Key findings showed, for example, that with the light rail works there was a significant increase in the number of planned signal programs in the vicinity of the works in 2015 compared to 2014. Consequently traffic speed in arterial roads directly or indirectly affected by the works was either maintained or improved. The route choice experiments showed that for planned events or even unplanned events such as a flash protest that involved road closures, there is a significant reduction in travel time of over 15% for those armed with traffic condition information.