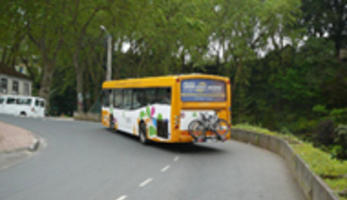 Funchal’s steep hills discourage its citizens to travel around the city by bike. To overcome this physical and also cultural barrier, the public transport operator has implemented a Bus and Bike scheme where cyclists can hop on a bus to comfortably make it to the top of the hills.

The Bus and Bike programme is the cornerstone of the city’s concept for sustainable mobility. It gives cyclists the opportunity to put their bike on racks installed on local public transport buses on five lines that cross through the city and link steep parts to flat areas.

Funchal’s west and central seaside area is flat and well suited for cycling, while the hilly parts of the city make many people reluctant to get on their bike. With the deployment of Bus&Bike, PT users can hang their bicycles on the back of the busses. To guide new users, instructions are provided on the bus itself. To encourage cyclists to use PT buses, the service is free of charge which means that no extra-fee was required from users who wish to carry a bicycle.

During the preparation phase of the measure, the Public Transport Operator was able to secure the patronage of local stakeholders including sports associations and cycling-related companies. Together with these partners, the PT Operator has defined guidelines to regulate the Bus and Bike service. During this initial phase, a feasibility study was carried out, as well, which collected and assessed different ideas for the routes that the service should cover, and the equipment best suited for the local needs. The transport of bicycles on buses was thus studied in-depth and a solution was found based on technical, security and accessibility standards. Accordingly, the PT operator found out during the R&D phase that it would be important not only to implement the measure on buses leading to the cycle lane and flat areas in the city, but also to install racks on buses connecting more hilly areas in order to promote bike use throughout the whole city.

The Bus and Bike service was launched during the European Mobility Week in September 2010 at the same time as a new cycle lane was built in the West part of the city. The public transport operator deployed 14 bike racks on the back of buses running on five routes. New bus lanes were designed that allow for the loading and unloading of bikes without disturbing the traffic flow.  The pilot has provided the Public Transport Operator with valuable insights into the required equipment and how such a service is received by citizens. The measure was encompassed by training and dissemination activities that aimed to encourage people to use this new integrated scheme comprising two sustainable modes of transport.

The measure was so well accepted by citizens that regional partners committed to elaborate a ‘Bus and Bike’ project addressed to tourists, planned to be achieved by 2015. This new project, called SEEMORE, will be developed under the umbrella of Intelligent Energy Europe program and aims to introduce racks to interurban buses for tourists.

The key results are as follows:
• 0,7 percentage points increase of bike usage – The frequency of bike use has slightly risen and citizens intend to maintain levels of usage or even increase them in the future.
• 56 bicycles transported via public transport in one year  – This result is much less than predicted, but there is some evidence to indicate that some PT users are considering  giving Bus&Bike a try in the future;
• High awareness levels – Almost one year after implementation, the Bus&Bike measure scored second  highest in terms of  awareness level among all the package of measures of CIVITAS (75% of locals are familiar with this measure).
It is noteworthy that Funchal launched ‘Bus and Bike’ while cycling had a very low modal split share. Since changes in mobility behaviour are usually taking place in a long-term process, significant changes can hardly be achieved within two years of implementation. Therefore the slow but positive trends observed in a shift towards bicycle usage ought to be considered as a positive and promising step towards the development of a cycle-friendly city. The implementation of ‘Bus and Bike’ services was successful and should be considered as a breakthrough in sustainable mobility in Funchal which was made possible thanks the intensive work carried out within the framework of CIVITAS.
Moreover, economic representatives in Madeira have interest in establishing bike rental services and to organise guided trips for cyclists which in turn can favour Bus&Bike in the future. 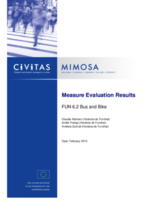