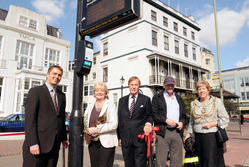 The Brighton & Hove council introduced over 20 ‘talking bus stops’ for blind and partially sighted passengers in 2007. The scheme - believed to be the first of its kind in the country - has made a big difference to users, giving them a greater confidence and independence to travel by bus.

People using the scheme have a battery-operated key fob which alerts them when they are near one of the talking bus stops. By pressing the fob, the bus stop ‘talks’ to them, giving them details of which bus services are due, and where they are going to. The bus stops have won several national awards for innovation and promotion of accessibility.CIVITAS is helping to fund a further 12 locations, which provide bus information to blind and partially sighted people at the touch of a key fob, helping then to move around the city independently. The first phase of the project Brighton & Hove City Council worked with key stakeholders (which included members of the blind and partially sighted community in the city and Royal National Institute of Blind People (RNIB)) to produce a plan identifying which bus routes are a priority for the project. Promotional leaflets will be distributed to the blind and partially sited community in the city by the end of January once the new units have been installed and are ready to use.