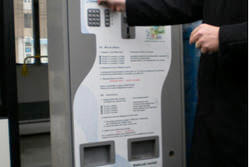 A special press conference, organised by RAT Craiova was held in Craiova on 20 January 2011. Representatives from the local/regional press and television channels attended the event, which presented both the services offered by RAT and the CIVITAS measures being implemented in the city.

The press conference presented the structure and state of the local public transport fleet, the services offered by RAT Craiova and the 11 MODERN Measures being implementated in Craiova. Reporters from five national newspapers, two radio stations and five television channels attended the event.A technical visit to the areas where the MODERN measures are underway gave a practical perspective of the project implementation. RAT technicians explained the challenges and achievements of the measures and showed the systems being implemented in action at ground level.These include:E-ticketingVideo surveillance Traffic monitoring through GPSBio-diesel bus serviceDuring the practical demonstration sessions, the reporters visited the chopper-system equipped tramway-depot and rode e-ticketing busses. Demo-sessions of automatic-ticketing equipped stations, cards release and recharge system were all part of the outing.