New services for cyclists in Aalborg 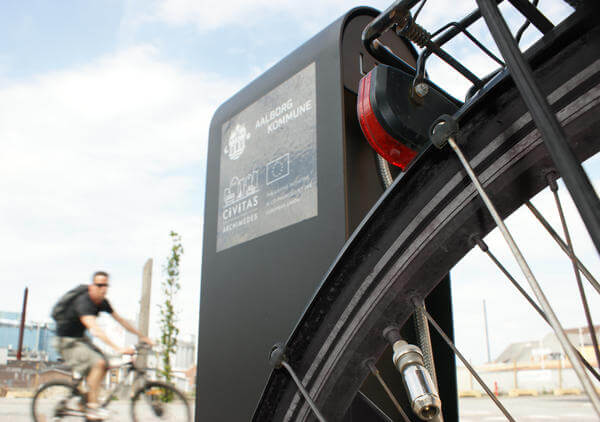 As part of the CIVITAS ARCHIMEDES project, the city of Aalborg has recently installed two air pumps for cyclists and a new bicycle counter on the commuter route between the city centre and the university.

On the cycle lane going south a bicycle counter has been installed. The purpose of the counter is to give cyclists valuable information during their travel time, which is related to the overall purpose of providing a high level of service on the cycle motorways. In addition, the counter is also seen as a way to increase the visibility of cycling for other road users. The counter provides cyclists and other road users with information on the number of cyclists passing the counter on any given day. The technology is based on so-called senso-lines that are placed in the asphalt of the cycle lanes. Furthermore, the counter also gives information on date and time, temperature, the speed of the cyclist passing by and based on the speed the estimated remaining travel time to the university. If the temperature is close to zero degrees, a snowflake icon will appear on the display to make cyclists aware of the risk of icy roads. Follow the Cycling Counter live on the homepage of the city of Aalborg! As another service facility on the route two air pumps have been installed. The purpose of the air pumps is again to make cycling more attractive by providing cyclists with an extra service. One of the pumps is placed near the bicycle counter and the other is placed at an intersection on the cycle motorway closer to the city centre which ensures that a lot of cyclists pass the pumps every day. The pumps have a built-in compressor and by pushing the button and using the connecting pipe that fits different valves, bike tyres are easily inflated.