Ljublajana was visited by a famous Danish photographer, blogger and cycling ambassador Mikael Colville Andersen, who gave a lecture on urban cycling, entitled “4 goals for promoting urban cycling”. He was also “the star” of the opening of his European photo tour “Monumental motion” which will be presented in different cities till the end of 2012. The show was exhibited in Ljubljana from 9 September to 25 October.

An opening of the “open-air” exhibition called “Ljubljana-Copenhagen-two cities-one bicycle” was a very nice and successful event. Andersen spoke about “Copenhagenization”, whereas Vice Mayor of COL, professor Janez Koželj talked about “Ljubljanization” – taking the Danish capital as an example and spreading cycling in the Slovene capital, as well. The Danish Ambassador to Slovenia HE Karsten Vagn Nielsen complimented the cooperation between the two cities.

Along the riverbank of Ljubljanica, at Krakovski nasip, 22 photos of cyclists form the streets of Copenhagen drew the attention of visitors. After 31 July, the Cycling network and CIVITAS ELAN partners selected 22 photos, based on Ljubljana’s amateur “cycle-chic” photo competition that accompanied Andersen’s exhibition on the other side of the city.

On 22 September, a CIVITAS parade was organised, which consisted of cyclists, various sorts of cargo and “artistic” bicycles, built by a well-known sculptor Jaka Mihelič and other supporters of the project. People in wheel chairs participated, as well. The parade also joined a massive dancing performance, »I Breathe Dance«, that took place on Ljubljana’s new central square Kongresni trg. 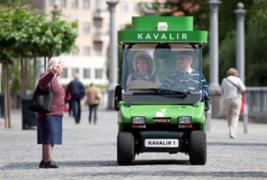