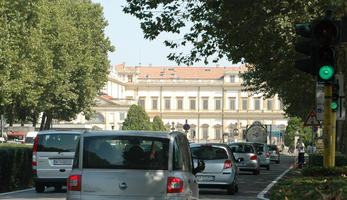 The aim of the measure is to design and implement an urban traffic control (UTC) system that contributes to optimising the flow of traffic through the city of Monza.

Monza is affected by a huge amount of traffic due to the vehicles that cross Monza to reach Milan. Prior to the measure, Monza had about 80 intersections equipped with traffic lights. This policy was no longer suitable to meet the requirements of a complex traffic control policy. In order to maximise the efficiency of the entire road network it is crucial to coordinate intersections.

The aim of the measure is to design and implement a UTC system that contributes to maximise the flow of traffic through the city of Monza. The use of real time location information gathered by the automatic vehicle location and monitoring (AVL/AVM) system is fundamental to increase the service level provided by the urban public transport.

The study to select the UTC system technical design has been completed.The first corridor consisting of eight intersections has been equipped after the tests have been successfully completed in project automation lab with the experts of the Municipality, such as the communications between Hydra Traffic Light Controller and the Industrial PC chosen to run new coordinated plans in the UTC environment.

A "Learning History Workshop" has been held with relevant stakeholders: top political representatives (Monza Mobility Councilor and City Manager), ARCHIMEDES Site Manager, Measure Leader, Municipality Traffic Engineers and Project Automation Traffic Technicians. During the workshop, drivers and barriers have been identified and discussed and future activities have been defined according to the scheduled workplan. After the analysis of the results of microsimulation, the experts of the Municipality decided the reference cycle times of the new traffic light plans for centralised control; 80 seconds in rush hours, 60 seconds in off-peak.

Each intersection put under control of the UTC system is under the control of a Central Computer; in ARCHIMEDES, the approach selected for managing the intersections included in the corridor identified in Monza is the “plan selection approach”, as described in deliverable T81.1. The UTC selected is RoadManager®, designed and implemented by Project Automation, technological partner of the Municipality of Monza in the ARCHIMEDES project.

The applications server for the UTC system has been equipped and configured in PA and the virtual private network (VPN) architecture has been arranged to guarantee the communication between the server and the Industrial PC. The system is currently being implemented. A good practice guide to bus management systems has been produced.

Evaluation activities have been aimed at measuring the results achieved, expressed through the following key results:

The measure can be successfully taken-up by other cities. Traffic light management is often underestimated as leverage to apply traffic control strategies, at least in Italy; many Italian cities and towns still have a poorer approach with respect to other European Countries. In fact, it is still common in Italy to find traffic light installation with no sensors and thus with fixed time green for each movement approaching the intersection. Continuous and very profitable relationships have been established between the technical staff of the technological partner involved in the project, and the technical and administrative staff of the municipality; which realized that these new approaches ensure much better results in terms of traffic management, in the framework of Intelligent Transportation Systems. This process, that has been established along Archimedes, has become a reference also for the future. 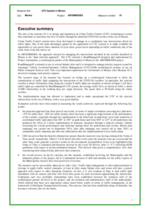