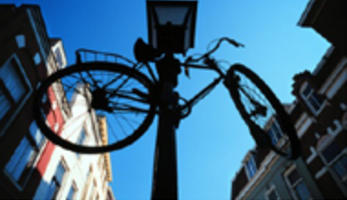 Utrecht wants to encourage people to more frequently use bicycles instead of their private cars for short trips in the city centre. The city will therefore extend bike rental locations.

Bicycle use in Utrecht is high: 52% of the residents usually go to the city centre by bike. Providing sufficient parking facilities is therefore one of the challenges in bicycle supply/ demand management. As the city of Utrecht wants to continue to promote cycling and give priority to the bicycle as the main mode of transport within the city, the measure ‘Public and rental bikes’ was designed with the aim at implementing a bike rental system with a dense network of pick-up and return points. It would contribute to solve the problem since one rental bike could be used by several cyclists a day without requiring extra public space. The goal of this measure was to increase the availability and use of rental bikes among commuters and/or visitors in the city. The longer term objective was to reduce the amount of short trip within the city centre by cars and increase the modal split towards sustainable modes. A large proportion of very short trips in the city centre of Utrecht are done by car. A lot of these could easily be made by bike.

Bike rental stations will in particular be extended to specific locations near Park and Ride facilities and business areas. Currently, the city faces a bicycle parking problem, especially at the central station. A rental bike can be used by several cyclists a day and therefore claims less public space for parking. An electric lock and a new form of payment will be established to make rental bikes accessible to a large part of the population 24 hours a day. Bike docking stations will soon outnumber public transport stops and can thereby well complement the public transport offer as an additional means of transport. This can in particular improve transport to and from Park and Ride stops, railway stations and other transfer points.

The results from the survey led to the adaptation of the initial measure plan of implementing few rental places which would be located at spots attractive to commuters and visitors. An estimated 30 to 50 rental places at strategic locations in the city seemed more viable than hundreds of rental places around town. After the first feasibility study was conducted, the decision was made to continue the measure within the MIMOSA project (with an adaptation of the original plan).
A project group was formed to set up a market consultation and to interview companies who would be able to provide the city with a bike sharing system from November 2008 until February 2009. The goal of this consultation was to get into a dialogue with bike sharing companies to allow them to give their view on the adapted rental bike concept. The main result of the survey pointed out that most companies think that operating a bike sharing system seemed unprofitable. Hence almost all companies expected the City of Utrecht to provide a (yearly) cost-effective contribution to cover the expected losses or assign an advertising concession to cover the costs. However, the market consultation reported very high operating costs for a rental system.

In March 2010 elections were held and as a result the responsible alderman changed. After the elections it became apparent that the government no longer wished to invest in the bike rental system (as proposed by the city council several years ago) due to the very high costs and given the fact that only one company successfully achieved the implementation of a rental system without public financial support. The mildly promising results of the market survey and the political changes in Utrecht led to the abandonment of the measure in April 2010. As mentioned before, one of the significant barriers which led to the abandonment of the measure was the lack of political commitment from the new alderman due to the very high costs and the knowledge that at least one company had already become very successful in developing and implementing a rental system in the mean time. Besides this the low commitment of the private sector to invest in bicycle rental system was low.

Although this MIMOSA measure was suspended before implementation, there are several recommendations for parties who are considering implementing a bike sharing concept. It is important to define for which target groups bike sharing is attractive. As in Utrecht almost every resident has his/her own bike, bike sharing concepts will not be used by them. The most important target group would be commuters arriving via public transport. Another recommendation in the Dutch/Utrecht case is not trying to develop a unique custom made system as the city of Utrecht had in mind, but to consider developing a national bike sharing system, as costs can be lowered and it would be attractive for commuters to have one system throughout the country.

Even if the establishment of a public bicycle rental system was not achieved in the frame of the MIMOSA measure, the city of Utrecht worked on a strategy to improve the demand/supply bicycle management, identify potential partners and determine specific challenges to take into account by developing bicycle rental system. Furthermore, the city established a close cooperation with a Dutch company which has been very successful in developing and implementing a system for public and rental bikes from 2008. The so-called OV-Fiets system enabled users the possibility to rent bicycles at railway stations all over the Netherlands (including Utrecht). In the frame of this cooperation, the potential of expanding the OV-Fiets concept in Utrecht to non-railway station locations were explored. The OV-Fiets concept has been expanded to several locations in the city in 2013. The first expansion of the OV-Fiets bike sharing system in Utrecht was at a bicycle parking 'Vredenburg' in the downtown area, which has been opened in April 2013.