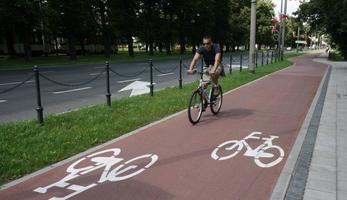 Gdansk is carrying out advertising and promotion activities to encourage citizens to make healthy and sustainable mobility choices.

The city of Gdansk is aware that if its sustainable mobility measures and infrastructure developments are to be successful, they will need to be communicated. The city therefore decided to develop promotional and advertising activities to make people aware of Gdansk’s participation in CIVITAS MIMOSA, and more importantly trigger behaviour change. The main objectives of the measure are to: • Promote sustainable modes from an angle of citizens’ health; and • Inform citizens of the availability of recreation facilities and encourage their use. The measure is mainly targeting adult inhabitants of Gdansk to animate them to use the city’s newly opened recreation facilities, such as the Tricity’s seaside bicycle path to enjoy better health. The facilities are a short distance from the city centre and close to a number of large residential areas. Information and promotion campaigns are to convey where citizens can do sports and what the facilities include.

Besides the dissemination of promotional materials, Gdansk organised different outdoor events: Social campaigns “Bike Fridays” (2010, 2011, 2012) were organized during three following Fridays in September as a street event intended to draw attention of car drivers to benefits of cycling as a city transport mode and to reward cyclists. The campaign was supported by celebrities including politicians, Olympic games gold medallists, actors and musicians. “Bike Fridays” outputs: - 3 editions of the campaign with over 5000 cyclists taking part each year - Support of famous Gdansk inhabitants - Over 15000 promotional materials (leaflets, gadgets and invitations to European Mobility Week events) handed to cyclists. - Over 100 volunteers involved in the action - Hundreds of media releases about the campaign. - The award of Social Campaign of the Year 2010 in Poland.

Bike festival “Rowerem do Celu” (2010,2011,2012). The event had a character of family feast with lots of attractions and activities to draw the attention of visitors to issues of safety cycling and healthy lifestyle. The bike festival was organized in the centre of the measure`s area, next to the pier in Gdansk. The police organised a “cycling training town” were each child could pass a cycling licence exam. The visitors could take part in various competitions, take a ride on concept bikes, see a first aid show or repair a bike in a free bike clinic. The other aim of the event was to increase awareness of issues relating to safety cycling among Tricity’s inhabitants, and also to make drivers sensitive to cyclists as legitimate users of the road.

The “Bike Fridays” campaign, already constitutes one of most important elements of annual cycling. It allowed development of methods of defining target groups precisely. It might easily be adopted to local circumstances in other cities. Establishing a civil platform to support all the activities, cooperation with a large number of experienced organizations and institutions created synergies which generated better outputs of actions and campaigns. Good practices in social communication were exercised by all involved. City authorities realized that social campaigns promoting cycling may bring much better results than expensive infrastructural investments. There is an upward trend in frequent cycling for leisure in the coastal strip area - just in the 2010-2011 period by ca. 7% on average, in  persons jogging every day by ca. 8%. The greatest increase in the frequency indicator (by 24.3%) occurred in 2010 –2011 in the daily walking. The other results are presented under sub headings corresponding to the areas used for indicators. 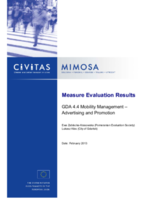 On Sunday 17 September, Antwerp organised its latest car-free Sunday. Taking place as part of European Mobility Week, the annual event has become something of a...