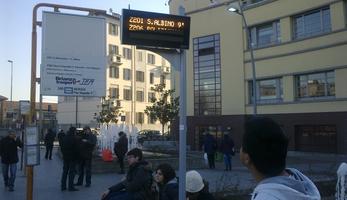 This measure aims to set up a real-time information system for urban public transport users, based on a bus traveller information study.

When the Porta Castello node became operational in 2006, the need to setup an InfoMobility service for Urban Public Transport was recognised by citizens. The aim of this measure was to set up a Real Time Information system for urban public transport, resulting in:

The research stage of the measure has focused on the analysis of the Urban Public Transport network in Monza, in order to identify the most suitable locations where to install electronic bus stops, as well as on the study of technical features of these devices  aimed at better developing their functionalities.

The implementation stage has developed in two different steps: in December 2011 the totem and the first two electronic bus stops have been installed in Piazza Castello, just outside the interchange node of Porta Castello. The two bus stops have different energy supply modes: one is connected to energy power, whilst the other is fed by solar power. In the second step, after defining bureaucratic issues with energy supplier, the other 8 bus stops have been installed in May 2012.

Such a measure is very important for citizens, so it is very important that all PT companies operating on the territory agree on developing it through the choice of a common AVL/AVM system or through an interface in case of different systems, so that every bus travelling on the territory can send real time information to the electronic devices. Such an improvement, even though in some cases can be seen as a means of control by the contract managers, will definitely implement the knowledge of PT performances and could possibly be a significant driver for people to shift to public transport.

Anyway, due to the important investment to be done, it is crucial, if such a system has to be implemented in all the city, to include in tender documents an obligation for those who will award the contract to complete the installation of such devices. For this reason, it is advisable that the contract has a duration allowing depreciation of such an important investment. 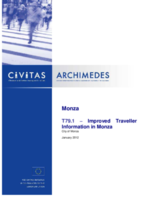