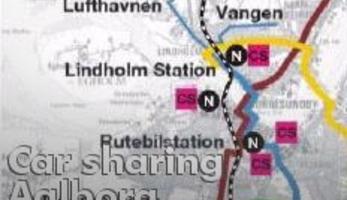 In order to reduce levels of car ownership in Aalborg, the Hertz Delebilen car-sharing scheme was launched in January 2004 at a single site, and a further four sites were opened in April 2004.

In response to the increase in private car ownership and the resulting congestion, a combined private/public car-sharing scheme was launched to:

The idea behind the scheme was to encourage membership among individuals, private companies and public institutions in order to make the utilisation of vehicles as efficient as possible throughout the day. This also ensured the economic success of the scheme.

In order to ensure that the car-sharing scheme met the requirements of all users, input was obtained from around 200 potential users by means of telephone interviews and dialogue with Hertz Delebilen.

The Hertz Delebilen car-sharing scheme was launched on January 6, 2004 at a single site. In April 2004, four further sites were opened. A system was introduced to allow members to book cars via the Internet, by telephone, or at the Transport Information Centre at the new public transport terminal.

Each member has a smart card and PIN number, which allows them access only to cars that they have booked. The system also records the distance travelled and the rental charge. Information on how much time remains on their booking and the mileage covered is always available to members.

Aalborg's Technical and Environmental Department worked with Hertz to establish a scheme for department staff. The cars are also available to other users during working hours, in order to ensure the scheme's sustainability.

As a marketing strategy, between October and December 2005 public transport passengers in Aalborg with a monthly travel card were invited to join the car-sharing scheme at a discount price.

The municipality of Aalborg carried out initial investigations into potential users' attitudes to car sharing during autumn 2002 in order to decide on the scale of the project and select locations for car-sharing sites. The results of this initial survey indicated the greatest acceptable distance between a user's home and the car-sharing site.

Aalborg established seven car-sharing sites with a total of 11 shared vehicles as part of the VIVALDI project. This exceeded the target of two to three sites and four to six shared vehicles. By spring 2010, four sites and eight cars remained in the scheme.

Total fuel use for transportation in Aalborg was reduced by approximately 1 percent. A total of 48,700 km were travelled by shared cars in the first year of the scheme. The average journey was 52 km, with fuel consumption of 13.7 km/litre. By selecting environmentally friendly cars, Hertz Delebilen managed to keep the specific energy consumption level at 2.4 MJ/km. The average for the private vehicle fleet in Aalborg is 3.1 MJ/km.

With a total of 149 members, 41 percent of whom had considered purchasing a car, the potential energy savings added up to about 2.860 GJ within the first year. This was about 1 percent of the energy consumption for transportation in Aalborg at the time of the implementation of the scheme. 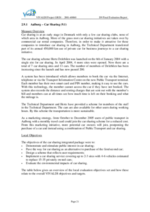