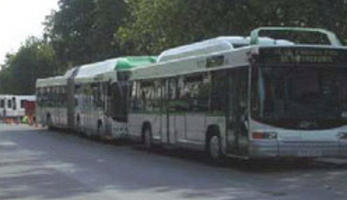 With the joint goals of attracting new public transport passengers and reducing the environmental impacts of its fleet, Nantes undertook a large-scale renewal of its public transport vehicles.

Prior to measure implementation, surveys among the public regarding perceptions of public transportation indicated the need to enhance the overall image of bus travel, especially in comparison to the city’s modern tram network, which had been opened in 1985.

Following experimentation with buses running on compressed natural gas (CNG) between 1997 and 1999, the measure was also designed to further encourage the use of alternative sources of fuel.

The plan was to introduce the new bus fleet mainly in the south east of the city. This area had been targeted as a priority sector in terms of traffic improvements and was the focus of several other transport-related measures.

Specific aims were to

The new buses were to have integral low floors; easy-access ramps; wheelchair spaces; and electronic display panels designed for use by those with reduced mobility.

Following a European call for tenders, two types of vehicle were selected: 125 Heuliez GX 317 CNG standard buses, and 30 Volvo 7000 GNV articulated buses. There were some delays in the delivery and commissioning of the new vehicles due to technical problems, but all the new buses were in operation by 2004.

Staff training was organised from February 2002 to December 2004 for drivers, maintenance employees and technical staff.

Following renewal, the fleet comprised 70 percent CNG-powered vehicles, and 90 percent of all trips were made on clean vehicles (trams or CNG buses).