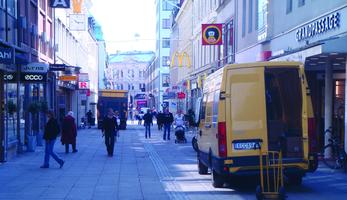 The measure involved the coordination of goods deliveries of office supplies to the Lundy district in order to reduce trips and improve air quality and safety.

One of the biggest industrial and commercial development projects in the history of the city is the development of the northern riverbank of the Göta Älv, in the Lundy district. The area used to be part of the docklands of Göteborg, an engine for the financial foundation of the city. Over the past decades, however, industrial structures have changed, leaving this central area open for redevelopment.

New companies and housing areas together with a more frequent delivery trend for companies create larger goods flows leading to problems with air quality and safety. By co-ordinating deliveries from suppliers to companies in Lundby, the demonstration aims to show the potential of improving the efficiency of goods transportation in the area. The demonstration measure focuses on consumer companies of office materials and makes them aware of their role in the logistic chain.

The aims of the demonstration measure were:

One baseline report was written for the measure. The report investigated the transport situation on Norra Älvstranden, how the companies order office material, and the type and mode of delivery of distribution vehicles. Four of the largest wholesalers of office material were contacted in order to verify their interest to work more with goods management and cooperate with their own costumers in the demonstration measure. Over the implementation the number of wholesalers had increased to five participants. In year 2002 the municipality opened the Lundby Mobility Centre and this measure was included in the group of measures based at the Centre. In this way the measure experienced synergies with other projects with a similar target group.

The measure arranged a big seminar at the 16th of September 2003 that gathered almost 60 persons. The aim of the seminar was to illustrate the measure from different perspectives of stakeholders such as Traffic and Public Transport Authority, AB Volvo, an office supplier and a forwarding agency. The outcome of this seminar was that two new companies joined the measure.

There were 17 companies in Lundby that joined the measure and the majority of them showed a decrease of transport frequency of office material by 30 to 80 percent with a mean of 41%. This means that out of 101.5 transports per month to the target companies, 42 have disappeared as a result of the measure. In reality the distribution trips may not have disappeared at this stage, but the need for stopping as often as before at the selected companies has decreased. Since the limiting factor to distribution is the number of stops for the distribution vehicle, it can be argued that this behaviour opens up to a more rational distribution. With more companies entering into a similar scheme, the potential is large.

In-depth interviews show that there is a clear positive reception of the initiative from the municipality through Lundby Mobility Centre. The companies appreciate the initiative, and are favourable to continued contact. On average, they rate the interaction with the municipality as good or very good, i.e. high grades. In a web survey carried out to measure the acceptance of companies to the work of the Lundby Mobility Centre, more than half of the companies asked stated that the LMC had helped them to start a measure for the environment, or helped them in their environmental work. 75% of the companies asked stated also that they have a more positive view on the environmental competence in the City of Göteborg due to the work of the Lundby Mobility Centre.