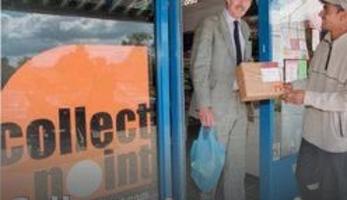 Freight maps showing routes, destinations and restrictions were distributed to businesses and local service stations, while recycling collections from businesses were made using an electric van. Five locations were set up for the Collectpoint scheme: an alternative home delivery service primarily for Internet shoppers.

The historic road network in Winchester city centre is not designed to cope with large numbers of heavy goods vehicles. Vehicles making deliveries to local businesses can cause considerable disruption to traffic movements, with knock-on effects on air quality.

Prior to the start of the project a local freight forum had been established, to work with local businesses to investigate ways to improve operations and reduce environmental impacts. Measures implemented by MIRACLES aimed to build on this work so as to reduce the impact of deliveries on both traffic congestion and local air quality.

The specific objectives were to:

Discussions were held with a number of companies regarding the feasibility of alternative delivery systems in Winchester. One such company, Collectpoint plc, offered an alternative to home delivery, primarily to Internet shoppers. Collectpoints were located in convenience stores, the main benefit of the service being the reduction in failed deliveries and the subsequent return of goods by couriers and postal services.

With support from MIRACLES, Collectpoint plc expanded their services within the city to a total of five locations. MIRACLES widely publicised Collectpoint and offered a 10-week free trial of the service during summer 2004. Feedback from initial surveys resulted in the free trial being extended until spring 2005.

In addition to the Collectpoint service, a Winchester freight map was produced for road freight operators and drivers of commercial vehicles, showing appropriate routes, the main delivery destinations, and vehicular restrictions. A total of 2,000 maps were distributed to local service areas, filling stations and Winchester businesses.

MIRACLES worked in partnership with Dove Recycling, a company making recycling collections from Winchester businesses, from February 2005, and provided an electric van for their collections within the city. The service aimed to replace predominantly diesel van journeys with electric van deliveries, resulting in 100 percent reductions in exhaust gas emissions.

Research showed that, on average, the delivery of one in five parcels in Winchester failed on the first attempt, indicating the potential benefits to be gained from an alternative delivery option, in terms of reduced time and distance travelled.

However, the initial Collectpoint trial was marred by technical difficulties and few people used the service. Lack of data made it difficult to assess whether the scheme would have been commercially viable, although the trial indicated that it would not. For such a scheme to be successful, Internet retailers would need to incorporate it into their system as an alternative delivery option.

The freight map was regarded as a useful tool by delivery drivers.

Prior to the waste recycling collection trial, 68 percent of businesses did not recycle, with 66 percent employing the council’s contractor SERCO to collect their waste using a 26-tonne heavy-duty diesel refuse vehicle and with the waste eventually being landfilled. From small beginnings, collecting a tonne of paper and cardboard a month, the recyclable waste collection service was apparently a commercially viable venture for Dove Recycling. By the end of the project period they were operating the service on a full-time basis and had expanded the scheme to other towns in Hampshire. However, despite the company being keen to explore the use of electric-powered vehicles there were no suitable vehicles commercially available during the project lifetime.