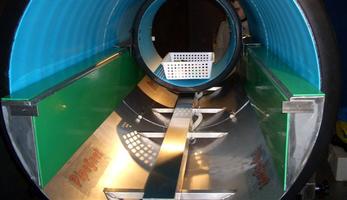 The city center is crowded with commercial activities, which require significant numbers of heavy and light freight vehicles, causing traffic and pollution problems. In general, freight and delivery vehicles damage the visual attraction of the historic city centre and the quality of citizens’ life. PIPE§NET can contribute to solve these problems.

All activities have been accomplished. Baseline analysis has been prepared and delivered. Acoustic measurements close to the access route to city center have been used in order to evaluate noise indicator. Traffic flow measurements in important access routes to city center have been analyzed. Additional research was performed concerning the electrical linear motor and its control system. Software has been developed to calculate logistic, energy and environmental performance of system in different scenarios. The best performing configuration of Pipe§Net has been studied to fit in the selected Perugia’s transport scenario, based on the results of baseline analysis: number of pipes and capsules, speed, pressure, etc. have been identified including any trade-off between different parameters. Other more general cases have been considered:  a maximum transferability basis for the system  with longer routes, higher velocity, more pipes, higher transfer rates. The application study have been completed: all evaluation indicators (emissions, consumption, noise, traffic volumes) have been calculated. Four scenarios have been included in the application study: three from the baseline in Perugia and one from the transferability scenario featuring a transalpine connection between Munich and Verona through Brennero. Cost-Benefit Analysis has been completed for all scenarios. A software to link parametrically the scenarios with CBA indexes (i.e. ENPV, ERR, etc.) have been set up for an easy evaluation when changing relevant parameters. Evaluation of most relevant parameters has been performed (e.g. threshold in demand or length of lines to have a profitable investment). System’s emissions and energy consumption is very low when compared to road transport. The system shows a benefit impact on all indicators and a good flexibility: economic analysis reports an increase in the welfare (after adding recurrent and onetime costs) both for urban and non urban freight replenishment. The measure was promoted in many different channels, including, to name but a few, the presence at DG-TREN conference (2009), at ISUFT conference (2010), at CIVITAS forum (2009), in a World Energy Council report (2009), in the Hannover Messe booklet (2010), in national and international magazines (e.g. The Economist in 2011, etc.).

The measure demonstrates the application of an innovative technology, Pipe§Net, for the efficient movement of goods in freight distribution of an historical city like Perugia.  Pipe§Net is an innovative freight transport system constituted by a network of special pipes which allows for high-speed and low-energy freight transport. Main benefits from the implementation of this system, if compared to on-road freight distribution, are higher freight capacity, higher speeds, and lower costs, flexibility and potential modular extension, very low energy consumption and reduced environmental impact.

The Pipe§Net system could replenish all the shops and trade activities within the city center in an flexible, environmentally sustainable and affordable way. Currently only road vehicles supply freight transport in the area, causing traffic congestion and badly affecting historical and artistic heritage. The measure  showed how both commercial operators and citizens could benefit, were the system be implemented in the city. The measure included the following activities: a baseline analysis of current situation; definition of system configuration to better fit the logistic requirements of the city (i.e. number of pipes, capsules, speed, pressure, etc. will be identified); formulation of full feasibility study, including Cost-Benefit Analysis.

The application of an innovative technology for the fast movement of goods, PIPE§NET, to freight distribution in an historical city like Perugia, has been analyzed.
Pipe§Net enriches the quality and quantity of solutions for optimization of urban freight supply chain.
The awareness of stakeholders for innovative solutions on logistic issues has been risen, in order to prepare the ground for the implementation of a pilot line.
The dissemination activity focused on increasing the interest of public and private organizations for radically innovative freight transport systems has been fostered