CREATE set out to examine how five Western European capital cities (Berlin, Copenhagen, London, Paris and Vienna) dealt with the growth in car ownership and use over the past 60 years, and how changing policy responses have impacted on congestion, air pollution and CO2 levels.

A further five cities, at earlier stages in their car ownership growth curves (Adana, Amman, Bucharest, Skopje and Tallinn) investigated the extent to which the Western European experiences could be adapted to their cultural and geographic contexts.

The study combined quantitative analysis of changing household travel patterns in each city over time, with qualitative interviews with city officials and politicians, to gain an understanding of the changing regulations, policies and public attitudes – and those things which had accelerated or retarded shifts towards more sustainable transport policies.

These policy priorities and supporting measures have tended to be introduced sequentially in three stages (Car-oriented in 1960s and 1970s; Sustainable mobility from the 1980s and City of places from 2000s), and have in turn led first to increasing car use and road traffic, then a levelling off and more recently a decline).

CREATE identified policy packages that were successful in different contexts in reducing car use, while enhancing the quality of public spaces and improving the provision of public transport, walking and cycling facilities. It developed a set of CREATE guidelines which brings together the various learnings from the project to provide cities with guidance on how to evolve and implement Stage 2 and Stage 3 policies.

CREATE worked with Central/Eastern European  and EuroMed cities to introduce these policies, which have enabled the authorities to move away from car-based planning.

All CREATE cities have been interested in the question: “what is Stage 4 and how might we plan for it?”; although the future is uncertain, one proposal was the ‘Integrated City’, where Mobility as a Service offers fully integrated transport services, and the widespread adoption of Smart City initiatives encourage more cross-sector investment planning.

Since the project’s end, CREATE ideas have been applied elsewhere in Europe and in cities in Sub- Saharan Africa and in South America.

Find out more on the lessons learned in CREATE on p.4 - p.6 of the publication CIVITAS Research Projects Lessons Learned 2015-2018. 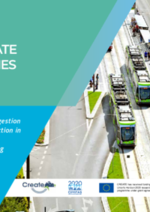 CREATE Guidelines: Pathways to Tackling Current Congestion and Reducing Levels of Car Use in European Cities

CREATE: Urban Congestion and Network Operation: Towards a Broader Set of Metrics for Assessing Performance 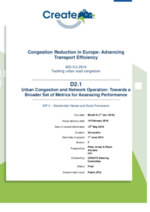 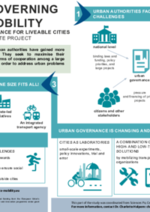