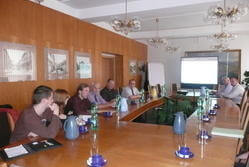 Recently, the second meeting of the Bicycle Policy Audit (BYPAD), was held with assessors to agree on arrangements for the Action Plan to improve the cycling situation in the area. The results of the assessment were presented along with the draft of the measures for the Action Plan. The discussion was organised according to the identification of responsible persons, the timetable and the financial framework.

The results were evaluated to 11 respondents of the town. The main areas rated were:• Obtaining information about the needs of city cyclists• Possibility for the cyclists to actively participate in decision-making process• Importance of cycling in politics and support• Cooperation with external organisations • Involvement of cycling in the city\'s transport policy• Funding and implementation of cycling• Problems of the cycle infrastructure• Safety for cyclists• Optimisation of cycle transportation• Traffic education and awareness of different age groups• Rights for cyclists• Gathering information As a result, several tasks were assigned to the Civitas ARCHIMEDES team, such as:• Promoting cycling - Web Portal • To develop the study of linking the Elbe and Ore cycling paths • To achieve Sustainable Urban Transport Development supporting cycling• Study the development of bicycle routes Some problems needing immediate attention were revealed. For example:• The insufficient number of bicycle stands in the city• Incorrect cycle signs• Absence of links between existing cycling paths• The official cycle paths ending before entering the city centre etc.The BYPAD meeting was successful and Usti nad Labem is now preparing for the BYPAD Certificate. 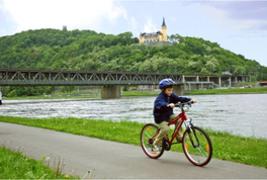