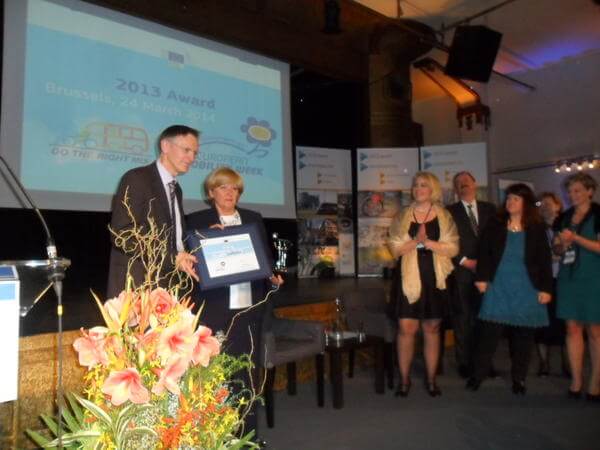 The City of Ljubljana was awarded the European Mobility Week (EMW) Award for 2013 in Brussels on 24 March 2014. Ljubljana participated along 30 cities from 12 countries and it is the only city to win the award two times.

The award was received by Jelka Žekar, Deputy Mayor, who commented on this exceptional recognition and how it will encourage the right path to quality of life and service for the residents of the city. She also emphasises the city will work for and with its citizens to achieve better solutions. She congradulated the other two finalists - Budapest (Hungary) and Östersund (Sweden) as well. The EMW Award was presented by Janez Potočnik, the European Commissioner for the Environment, who commented the European Commission recognizes cities with exemplary activity in change toward sustainable mobility with the EMW Award. He continued by pointing out the European Commission formed new politics and measures with a positive effect of air quality of life, where innovative approach is encouraged.

Ljubljana has received the EMW award twice – the first award being presented in 2003, and it is the first city with such recognition. The committee recognized the city's outstanding activity and the upgrade of previous achievements.

This has been a 12th year consecutively for the city of Ljubljana to participate in the European Mobility Week, the most widespread campaign for sustainable mobility, traditionally set between 16 and 22 September. The city has strived for environment and society friendly mobility with diverse array of activities. The central theme of the EMW 2013 was "Clean Air, It’s Your Move", which purposefully aimed to remind us we are capable of contributing for clean air – even the slightest alterations in out transport habits can have a great effect on the quality of life in the cities with traffic as the main air pollution cause.

- the Car-Free Day on 22 September restricted motor traffic on Slovenska Cesta in the Šubičeva Ulica and Gosposvetska Cesta section – the area was revamped to encourage walking, cycling and public transportation.
- the introduction of Kavalir 3, the closed electric transport vehicle which complements the first two open vehicles. The ride operates throughout the whole year regardless of the weather.

The European Mobility Week was additional accompanied by 10 week-long activities and 20 events with the collaboration of numerous partners and organisations. The elementary schools and pre-school centres in Ljubljana have been especially exemplary with their organisation of 250 events in that week.

The award also rewards achievements and measures that have been implemented or in preparation during the CIVITAS Elan project in Ljubljana.