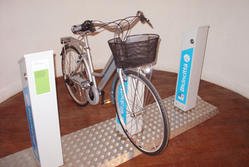 The CIVITAS RENAISSANCE measures being implemented in Bath have featured in a major public exhibition, giving visitors the chance to see some of the exciting measures being introduced in the city for themselves.

The three-day “Treasure and Transform” exhibition brings the story of the transformation that is currently underway in Bath & North East Somerset to life, and the projects and partnerships that will shape the city’s future prosperity.Bath’s two CIVITAS cycle hire systems formed a central part of the exhibition, with both a Powabyke electric bicycle and a Bicincittà bicycle and docking station on display. It was the first time that Bicincittà’s system had been shown in the city. The two cycle hire demonstrations are due to commence in Bath in spring 2011. A model showing the locations of the six City Car Club hybrid cars introduced to Bath by CIVITAS Renaissance in 2010 was also included in the exhibition.A hybrid double-decker bus, which is being trailed in the city by First as part of CIVITAS RENAISSANCE, travelled between the exhibition venue and the city’s Lansdown Park and Ride site for the duration of the exhibition, allowing visitors to experience the innovative vehicle for themselves.