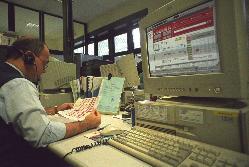 The question is Gordian. How can traffic flow be improved in a typical European city, let’s say in Graz? By improving the traffic light system? Of course. By adapting the road network? Certainly. Graz complements with 200 vehicles of a local taxi fleet, acting as permanent traffic oberservers and deliverers of data for accurate traffic management. The advantage? They are already driving and are a good complement in the collection of data and localisation of where the problems are.

The core element of the new system are the more than 200 vehicles of the taxi fl eet 878. They are all GPS-equipped and act as permanent traffic observers that report the actual traffic data to the taxi headquarters. This so called “Floating Car Data“ data are put into a traffic modell that should allow a fairly accurate prognosis of the future traffi c situation. We mainly benefit from a system that is already running: the taxis, says Fritz Busch from the Technical University of Munich who has been consigned by the city of Graz to develop the new system.As with many astonishing ideas Fritz Busch was inspired by nature. The neural network is the starting basis for the system, it gathers and processes information via different sense organs and makes us react and understand. The Traffic Monitoring System follows the same principle: it consists of different data sources and performs highly sophisticated fusion and integration tasks.So far so good. But: How does the information come to the end user,i.e. the driver? Of course the raw data has to be filtered to guarantee reliability and plausibility of the data. A taxi that is not always driving, it could be blocked in a congestion or waiting for passengers, explains Fritz Busch.As a consequence the system has to be highly fault tolerant and fail-safe as well. Then the information allows reliable prognosis of the future traffic status. This means for the end-user that he will be able to get information on the current traffic situation via the internet and also by mobile phone.