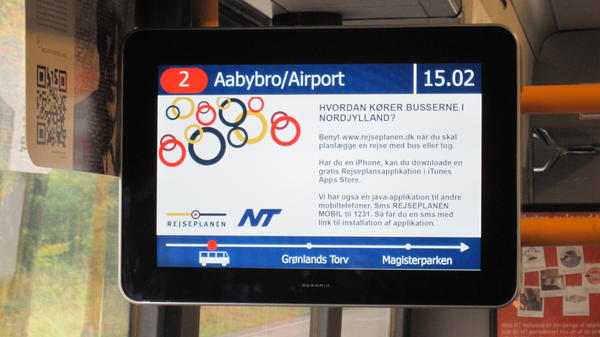 The successful experience with information monitors on city buses in Aalborg has led the city to set up additional screens. Furthermore, buses operating elsewhere in North Denmark will be equipped with these displays, as well.

The Public Transport Authority of North Denmark (NT) has introduced the on-trip bus information monitors. The 50 buses operating in the CIVITAS ARCHIMEDES corridor were equipped with flat screens that provide passengers with real-time information about their trip such as forthcoming bus stops. Prior to the implementation of this measure, NT has carried out a pilot project that consisted of the installation of flat screens on a selected bus line. Besides the public transport information, the screens display news, information on the weather and advertisements. Based on the experience and user feedback during the pilot phase, specifications for the on-bus information system were incorporated into a tender. Since the installations and tests were completed in the autumn of 2010, the system has been in operation with only a few minor problems. User surveys show that almost all passengers consider the screens a service improvement and are satisfied with the way the information is presented. Almost two-thirds of the passengers think it is alright that advertisements are shown, as well. The advertisers have welcomed the advertising opportunity, which has yielded predominantly positive results. The advertisement agency is happy with the number of impressions the ads get, even though economically the bus screens have not yet had the expected turnover. As a result of the successfull implementation of the screens, the Public Transport Authority of North Denmark will equip additional 60 buses in the region with information monitors. The 50 buses which already feature information screens are city buses in Aalborg. The next 60 buses are operating in other places in the region.