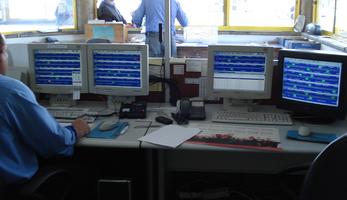 The new system is able to update information displays on bus stops within less than a minute. It also allows more than four items on arrival times of public transport vehicles at bus stops. The new system also has greater capacity to monitor a higher number of vehicles in real-time. It has the capability to provide real-time travel information via SMS. Coimbra also has prepared the system for a future integration with a new traffic light regulation system which gives priority to public transport. 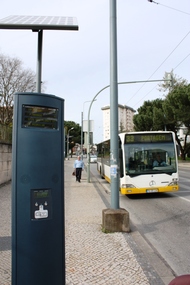 The conception and definition of technical specifications for the Operation Support System upgrade were carried out between late 2007 and 2008. After purchasing the GPS / GPRS – Operation Support System, the installation of the 125 new single board computers for the totality of the SMTUC public transport fleet was carried out. Also,  the new software was installed in the SMTUC control centre and in the 12 existing real time public information e-panels at bus stops .Since then, the operational management and monitoring of the updated GPS / GPRS – Operation Support System  has been carried out. This process entails the monitoring of the public transport network, functioning every day from 5:30 a.m. to 1:30 a.m. with at least one operational personnel in permanence, reinforced by more personnel, mainly at rush hour. Some of these activities are:

• Monitoring the real time trip of the buses to avoid gaps in relation to the scheduled times;
• Monitoring the real time information displayed on electronic panels at bus stops;
• Establishing communication with the bus drivers when necessary;
• Real time security survey of PT users and bus drivers;
• Real time maintenance survey of buses and other equipment, like panels in bus stops and audio real time user information in the interior of the buses;

In late 2008 and 2009 the SMTUC Mobile application was developed. Allocated in the SMTUC webpage for download, the application supplies PT timetables on mobile phones. The application suggests the best trip time for the PT line chosen by the user, according the planned hour or the period chosen.

Also, a technical study for preferential traffic light regulation for PT was conducted between September 2009 and January 2010.
The study took in consideration the following:

• Survey of Urban PT lanes and road intersections;
• Survey of traffic light controls;
• Contacts with suppliers to choose the best solutions to apply;
• Study performed to analyze various solutions for the conflict between regular traffic and public transport in traffic light controlled intersections;
• Traffic counts at the designated axis;
• Study of the traffic lanes with the most congestion during the period of highest traffic intensity (rush hour);
• Study of the two alternative solutions agreed to and cost estimates for each one.
• Release of a report that schematizes the two agreed solutions, highlighting the advantages and disadvantages of each one

Also during this period, the installation of the 2nd generation e-panel that allows real time public information at bus stops has been carried out. Especially relevant is the purchase of 5 new e-panels for interiors with real time information about the bus transit time at the bus stops adjacent to the main hospital of Coimbra (as one of the actions included in the mobility plan SanusMobilis for the health cluster – CIVITAS MODERN measure 04.05)

The demonstration of the measure achieved positive impacts over (passenger numbers and therefore in) the average operating revenues, operating costs, the percentage of trips lost due to traffic problems, the average network speed, and the awareness level of the PT users in a relatively short period of time. More precisely, the e-panels have a refresh frequency rate lower than 1 minute and the SMTUC commercial speed was increased by 2,4%.

The results obtained in relation to the Cost Benefits Analysis (CBA) suggest that the measure is both effective and efficient in achieving positive results in terms of cumulated costs not only in lifetime of the measure (11,7M € in 10 years) but since the year of its implementation. Also, more than half of the investment will be covered in 10 years only with the decrease of the costs.

The implementation of the measure shows that: 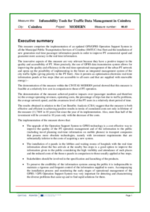