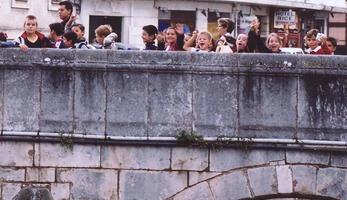 Lack of pedestrian and bicycle routes connecting residential areas to the city centre leads to frequent car use in peripheral neighbourhoods. The creation of bicycle and pedestrian paths and the renewal of existing facilities can greatly improve road safety and quality of life in these areas.

The city of Burgos has expanded by approximately 20 km around the river Arlanzón, absorbing outlying villages. Access to these new neighbourhoods is by main roads, as former footpaths have been obliterated. Residents wishing to go on foot from their homes to the city centre are faced with a lack of pavements, leaving them at risk from passing vehicles as they walk along narrow roadways. Inevitably, most residents and visitors to these neighbourhoods end up using their cars for daily travel, greatly increasing the volume of traffic. In addition, mobility problems have worsened due to the high growth rates in these neighbourhoods, where the population has doubled in recent years because of the high price of housing in the inner city. This means that most families rely on a minimum of two cars in order to solve their transportation needs.

The main objective was to improve road safety for pedestrians and cyclists in the different neighbourhoods of the city, especially where there was a lack of footpaths, by addressing the question of sustainable mobility as a whole. This included measures guaranteeing clean urban transport, such as urban bus services. Traffic calming measures, such as 20 km/hour zones and speed bumps, were introduced and traffic lights were improved.

Activities such as the installation of pedestrian paths and cycle lanes were first implemented in the Villalonquejar neighbourhood at the beginning of the CIVITAS CARAVEL project, and the strategy was then transferred to nine other similar neighbourhoods. Many residents in these areas expressed a desire to improve road safety and to reclaim space for pedestrians via appropriate traffic and parking regulations.

More than 2,000 people in the pilot area are enjoying better road safety and over 200 now use bicycles for daily trips. The number of accidents has fallen mainly due to the reorganisation of the traffic and parking and due to traffic calming measures. 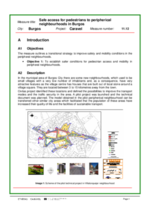