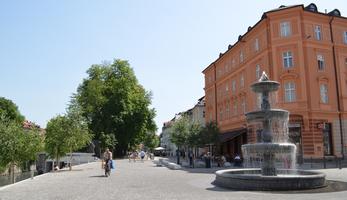 When asked what is the best improvement and achievement in Ljubljana in the last 5-6 years, the big majority of Ljubljana’s inhabitants, commuters and occasional visitors will refer to its large pedestrian zone in the city centre. The pedestrian and reduced speed zones in Ljubljana are probably the most visible of ELAN’s measure, having a huge impact on sustainable changes and the revitalization of the old city centre due to the opening of many new restaurants, cafes and shops. This transformation took place in a relatively short time period. While there was some disapproval at the beginning (taking away some parking spaces) acceptance is constantly increasing.

Furthermore, as a result of initiatives coming from other parts of the city, the City’s “Transport Policy Proposal until 2020” includes plans for pedestrian zones and reduced speed zones at several other locations in Ljubljana. Furthermore, there is evidence that other Slovenian cities are following Ljubljana’s example and there are regular news on communities taking away space for cars and giving it to people.Ljubljana managed to make road traffic safer through the introduction and enforcement of speed limits and reduction of motorised traffic in the city centre. Therefore, the city is implementing a combination of different activities to increase the safety of all traffic users,  the most vulnerable traffic participants in particular.The municipality has  reduced  the speed limit in most of the city centre from 50 km/h to 30 km/h and has enforced  this new speed limit effectively. In addition, the city aims to improve cooperation among enforcement agents and provide training for even more effective enforcement.

The main objectives of the measure were  to:

Ljubljana has introduced new pedestrian zones, new parking areas for people living in new pedestrian zones, one-way streets and reduced speed streets or zones and higher speed regime for main avenues. While there are already a few areas and streets in the city centre that have a 30 km/h speed limit, this area has been extended to only leave out the busiest roads used by public transport. The public has been informed about the benefits of the measure and devices have been installed to help sanction violations. The reduced speed limit not only helps to improve safety in the city centre but also contributes to less transit traffic through the city centre. Ljubljana has in the past few years expanded pedestrian, reduced speed zones and one –way streets f to  2.129 hectares (2013).

Ljubljana has implemented several 30 km/h zones and installed traffic signs throughout the entire area in the city centre. Critical road sections have been fitted with modern traffic control devices that help to enforce the speed limit. Additionally, equipment to monitor and keep records of violations has been purchased and new traffic calming devices are being tested and used to further enhance road safety.  The municipality installed seven radar facilities and two new traffic calming devices. Based on an analysis of internal enforcement behaviour structures, training on enforcement culture and communication has been provided.
In accordance with this vision of sustainable development of Ljubljana, the city has established an ecological zone in the wider city centre area, which we are further expanding every year.. Pedestrian areas in the city centre have been increased by as much as 550% over the past five years. In the past five years the city has, apart from CIVITAS-ELAN project, introduced as many as five new bridges within the ecological zone and have renovated the river banks to create new walking and cycling areas.  Last year the City of Ljubljana received the prestigious European Prize for Urban Public Space 2012 for this comprehensive renovation and reorganisation.

The evaluation of the measure proved success.

Key result 1 – Increase in pedestrian/reduced speed zones
During the project lifetime a wide area in the centre of Ljubljana has been turned into a well-designed and efficient pedestrian zone: more than 70 city streets have been transformed, however only one street was directly associated with CIVITAS ELAN (the others were funded outside of ELAN project), although it introduced the initial idea for the implementation of reduced speed zones. The pedestrian areas in the city centre have been increased by 550%. The target of an increase by 30% has been exceeded.
Also the rest of the road network has been revised with new one-way roads and streets in accordance with the objectives and strategies of traffic calming. The results also show that the reduced speed zones (30 km/h) have been increased by 12%.

Key result 3 – Reduction of number of traffic accidents in pedestrian areas
The results show that the reorganisation of the motorised city streets into pedestrian area can contribute significantly to the improvement of safety in the city centre. The reduction by 33% in minor injuries can be observed in 2011, while the data for severe injuries is statistically not strong enough to draw any firm conclusions.

Key result 4 – High acceptance by stakeholders
The majority of the surveyed stakeholders have praised the general improvement of the image of the city, public transport, new traffic arrangements, lower noise levels, air quality and positive attitude they have regarding the changes. More complaints than praises were only seen regarding the reduction of parking spaces (with the exception of residents’ responses) and freight delivery services. The average score for all categories is highest for the shopkeepers (71.6%) and the residents (70.8%), but also for the pedestrians passing by (66.5%) the target level of 50% acceptance has been exceeded.

The realization of these new arrangements in the centre of Ljubljana is helping to achieve a better quality of life in the city, providing the city with qualitative urban public areas, uniting the whole area and enabling a smooth flow of foot traffic. It is also contributing to an increase in trade, tourism and catering services in the city centre (gardens) and indirectly reducing traffic pollution (noise and air pollution).

There is no doubt that the entire project CIVITAS-ELAN project has influenced a new, sustainable approach and brought to Ljubljana new ideas on mobility of people. The same is true for measure 5.5-LJU. More emphasis on citizen engagement and new dynamics to implementation are some of these contributions. With an active participation of all stakeholders many misunderstandings and possible opposition to changes have been avoided, good practices from other CIVITAS cities have been introduced and false solutions excluded. 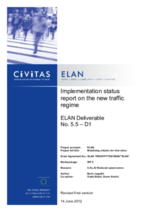 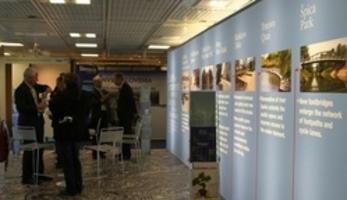 Several representatives of the Municipality of Ljubljana, including the leader of the Integrated high-quality mobility corridor measure, Sabina Popit, participated...