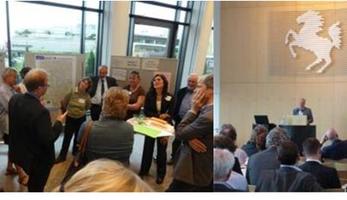 Stuttgart is located in the centre of a thriving economic region with high traffic. Every day about 800,000 cars enter and leave the city. Since a complete peripheral ring road does not exist, car traffic is forced to use the limited urban road network. Although HGVs are prohibited from passing through the city and parts of the greater Stuttgart region, 6% of circulation of motorised vehicles within the city boarders are HGVs that come and go into the city or head to other parts of the region. As a result, vulnerable urban areas are negatively affected by air and noise pollution.

To inform the truck drivers on the recommended road network for HGVs, respective information is now available on the internet via a downloadable pdf-version of the map. Leaflets are distributed in Stuttgart and the surrounding regions on the topic.

In a test-corridor the HGV traffic was directed to alternative traffic routes using dynamic traffic control strategies. This enabled the resp. authorities to analyse the HGV-related environmental impacts within concerned areas. The integration of transport management and urban and environmental planning is particularly a new and innovative aspect. In general, these two aspects are strongly linked to each other.

The measure ‘HGV-network’ mainly deals with defining an appropriate network for HGV. It analysed which road segments of the main roard network are suitable for handling the HGV and can be combined with other network functions (e.g. the strategic network for traffic control). In addition the measure identified road segments which consider urban or environmental requirements. The analysis has resulted in the first draft of the HGV network.

This first draft has been discussed with three different stakeholder groups. The groups represent the users (e.g. chamber of commerce and industry, department for business development, representatives of outstanding companies), relevant public (e.g. citizens, local politicians, groups of interest), and the experts (local and regional).

This process took place in spring and early summer 2015 and included three events:

Following this consultation process a large number of measures that potentially may shift HGV to designated roads or protect sensitive areas from HGV-related impacts were analysed. Effects on route choice and traffic volumes as well as changes of air concentrations and noise levels were calculated with the chosen methodology. The final traffic assignment with the priority network for HGV was carried out with the following results:

Taking into account these results the priority network for HGVs has been completed and comprises:

Finally the HGV priority map was developed showing on the front page the recommened HGV priority network and on the backside the area in which HGV through-traffic is prohibited. Additionally the map includes information on the relevant traffic signs and on points of interest. The locations of the necessary HGV related signposts were determined by using the basis of geo-referenced signage plans.

The measure analysed in a test corridor whether this approach can be recommended. Traffic volumes and the share of HGV were calculated on alternative routes during the periods of dynamic guidance. The level of the measure's acceptance was estimated based on these calculations. Traffic data were also used for modelling changes in emissions and noise levels. Travel times have beenmeasured also. In addition, operating costs for HGVs were estimated based on changes in travel times. Construction and operation of the dynamic guidance facility were funded by the municipal traffic control centre.

The test corridor was situated in the western part of the city. A federal motor highway connects the highways A8 and A81 directly with the city and the city centre. As alternatives there are three routes which are classified as municipal.

A specific network for HGVs was determined based on the existing major road network. This recommended HGV network is of high importance for various stakeholders:

Urban and environmental planning: The integrated approach offers the chance to protect vulnerable areas from HGV-related impacts. At the same time the defined HGV-routes guarantee that more functional road design will be considered in future planning processes.

Traffic control: The defined network provides a fundamental basis for meeting the requirements of an efficient and reliable commercial transport system. The technical infrastructure can be improved within the HGV-network systematically. Also the HGV network can be implemented in dynamic routing systems and is essential for further signposting.

The traffic assignment shows that already today most of the vehicle kilometers of HGV-transport are done on suitable parts of the main road network. Total distance, total travel times and total operating costs decrease by 1%. Regarding the HGV transport emissions, the decrease is even lower between 0,3% (NO2/ NOX emissions) and 0,6% (noise). A traffic-control effect is not to be expected just by the definition of the network, but additional measures along the network may lead to noticeable changes in the traffic flow on the respective routes.

The assignment also points up that concerning HGV transport, the aspects ‘environment’ and ‘transport’ are highly contradictory. The approach to determine the HGV network took into account this contradiction. The HGV-priority network and the associated qualitative requirements (e.g. synchronised traffic lights, design parameter) offer mostly practical significance for relevant administrative departments in Stuttgart.

The new road map of the recommended HGV network is available in a printed and a digital version. It serves as planning tool both for public authorities and private companies.

In addition, a new project with a GIS supporting documentation of traffic restrictions has been created within the administration.

A dynamic traffic control system has been used in a test corridor to guide the HGV traffic on alternative routes. This test has showed the capability and the limits of dynamic HGV guidance. 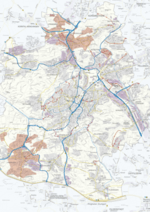 2MOVE2 Map of the recommended HGV network in Stuttgart