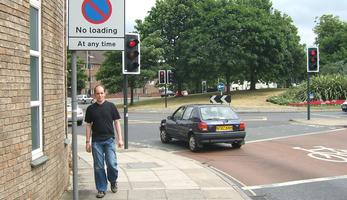 It is often impossible to share road space among different users in a historic city centre, thus most sharing must be regulated by time controls.

In the Medieval city of Norwich, it is sometimes difficult to balance the conflicting needs of pedestrians, cyclists, car drivers, public transport vehicles and delivery vehicles. Within the heart of the city, many streets are pedestrianised during peak hours of pedestrian activity, and deliveries are permitted only outside these hours.

The aim of this measure was to restrict access to two city-centre streets to pedestrians, cyclists, public transport vehicles and delivery services only during hours of peak pedestrian activity (i.e. between 10:00 and 16:30). Access would be open to all traffic at other times.

St. George’s Street, on the edge of the main shopping area, was pedestrianised in April 2007, while for six weeks during summer 2008, St Benedict’s Street, a busy shopping street of independent retailers, was closed to traffic every Saturday between 10am and 5pm.

In the case of St. George’s Street it quickly became apparent that the mix of general traffic and a flush surface led to safety problems, thus the decision was made in January 2008 to close the street to all traffic at all times.

In St. Benedict’s Street, it became clear that, despite support for the idea from the local traders during the planning stage, the pedestrianisation did not work for them in practice, and, mindful of the changing economic climate, the scheme was withdrawn.

Neither scheme succeeded as a part-time access control measure. Among the lessons learnt from the project is the need for a clear reason for closing a street at certain times and not others. With St. George’s Street it was clear that vehicles did not need to be there at all at any time, while with St. Benedict’s there were no obvious benefits from excluding cars on only one day of the week. 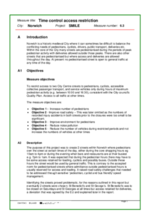 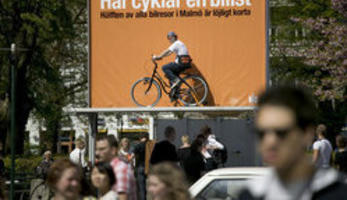 Two large campaigns, No ridiculous car journeys and Which road to take, have brought attention to environmentally adapted transportation and the problems associated...