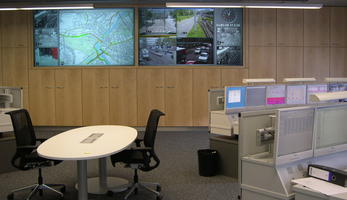 The measure focused on improving traffic conditions and promoting intermodality in the context of major events in the city and reducing congestion and travel times by providing optimum information.

Specific goals of the measure were to

Research was carried out in order to help establish the strategic and technical bases for traffic control operations, including scenarios for incident management and for the parking and traffic guidance system.

The Integrated Traffic Management Centre was put into operation in April 2006, and in the same year two control scenarios — the Bad Cannstatt incident management system and the NeckarPark parking and traffic guidance system — were developed. The Bad Cannstatt system included the installation of roadside display systems to direct traffic in the event of a major incident. The dynamic display systems and traffic signals can all be changed so that the diversion route is more efficient than in the past, when everyone tried to avoid the traffic jams independently, leading to congestion in surrounding areas. Dynamic lane signalling on Gaisburger Brucke was introduced to control incoming and outgoing traffic in the NeckarPark event area.

The inauguration of the new Security and Mobility Management Centre, which includes the Integrated Traffic Management Centre, represented a unique approach in Germany. It combines diverse urban authorities such as city traffic management, the headquarters of the police traffic department, the fire department and ambulance service, and the Stuttgart public transport operator under one roof. The partners cooperate at a strategic and operational level, coordinating information and taking concerted action allowing for rapid and direct crisis management.

Due to the new Integrated Traffic Management Centre, traffic management during the Football World Cup 2006 was smooth and traffic jams were prevented.

Traffic is now able to leave the car park after a football match rapidly due to the use of three lanes rather than two. The fourth lane for incoming traffic is reserved exclusively for pedestrians leaving the area. This has halved the time needed to empty the stadium car parks. Prior to the measure, it had taken around two hours to empty the large car park of the 3,500 vehicles.

A comparison of emissions values during peak period revealed a reduction of between 10.2 and 53 percent during six 10-minute periods, equating to an hourly average reduction of approximately 38.1 percent of carbon monoxide and nitrogen oxides from traffic leaving the stadium after a match. 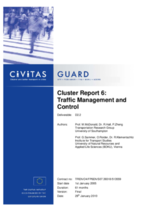 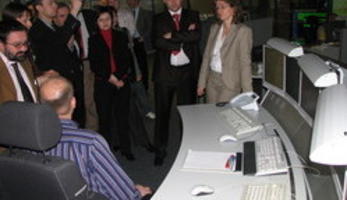 The new Integrated Traffic Management Centre (ITMC) in Stuttgart hosted over 30 participants at the CiViTAS CARAVEL Telematics Workshop in Stuttgart.