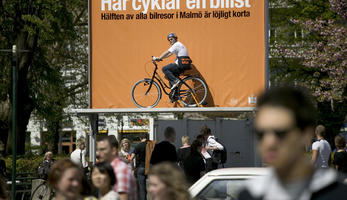 With a good track record in the provision of cycling infrastructure, Malmo aimed to improve cyclists’ safety and security within the city’s integrated transport system. Photo credit: City of Malmö

With 410 km of bicycle lanes in 2009 and an ideal climate and topography for cycling, more than 20 percent of all trips in Malmo were made by bicycle prior to measure implementation. However, the city did not have a consistent and coherent marketing strategy to promote bicycle usage. Services and signage along cycle lanes were poor and integration between cycling and public transportation nodes, with the exception of some bicycle parking at the central rail station, was poor or non-existent.

This measure was intended to focus on the connections between cycling and public transportation in order to create a fully intermodal transport system. It included:

An original objective to construct two bicycle parking facilities at the central railway station and the Sodervarn regional bus terminal had to be abandoned due to the lack of sufficient and appropriate available space.

In 2006, a total of 26 radar bicycle detectors were installed at high-risk intersections, with the aim of giving cyclists priority at traffic lights without them having to dismount to press a button and wait for a green light.

The concept for high-quality demonstration cycle lanes was developed in 2007. The two demonstration lanes were selected on the basis of being located by, or servicing, public transportation nodes; and of being used by a high number of cyclists. Depending on the existing condition of the lanes, improvements included better lighting, the provision of air pumps, better signs and new surfacing.

In May 2007, a large-scale bicycle information campaign was undertaken to encourage car drivers to make greater use of bicycles for short trips. This included the production of materials promoting the health benefits of cycling. Thematic bicycle maps were distributed free of charge.

In 2008, the 3D model of a state-of-the-art parking facility and handbook on cycling promotion, highlighting the potential for intermodality, were presented to the public at various locations.

The percentage of cyclists stopped for any length of time at junctions varied considerably on the different observation dates. In the best case, the percentage of cyclists stopped at traffic lights fell from 64 percent to 47 percent due to the bike detectors. The average time that a stopped cyclist waited at the lights for green was reduced by between 2 and 7 seconds. A survey indicated awareness among cyclists of improvements along the demonstration bicycle lanes. A telephone survey after the information campaign suggested that 40 to 50 percent of all residents were aware of the campaign and that about 10 percent thought about changing, or actually changed, their travel habits as a result. A general survey suggested an increase in bicycle usage from about 20 percent to about 22 percent in Malmo during the SMILE project. 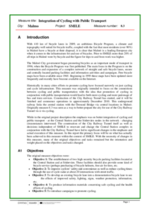 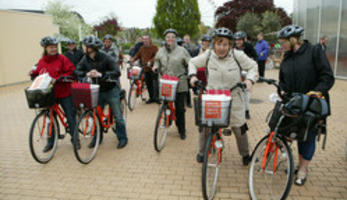 Malmö companies on their bikes

Since the start of the project in spring 2007, 53 Malmö companies have cycled more than 18,000 km on their new orange bikes. The initiative is a part of CIVITAS...