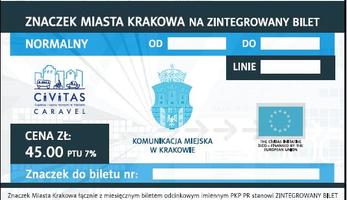 In a pioneering measure, Krakow aimed to create seamless intermodal connections in the city through the use of common tickets and tariffs for national railway and local public transportation services.

Prior to measure implementation, there were no integrated tickets for the national railway service and other modes of transportation. In order to promote the use of public transportation and improve passenger flow, the city decided to test an integrated ticket and tariff solution. Due to budget constraints, the pilot application was limited to one transport corridor (Krzeszowice–Krakow).

According to the feasibility study, the introduction of integrated tariffs and tickets in Krakow could be based on experience acquired in the Polish city of Wroclaw, where an agglomeration ticket can be purchased by means of a surcharge on the public transport season ticket, allowing an unlimited number of journeys on rail and bus lines.

Meetings between the city of Krakow and the Polish State Railways resulted in the preparation of a contract on integrated tariffs and ticketing.

The trial project, integrating tickets for the railway line between Krzeszowice and Krakow with one line of the city’s public transport system, was launched in March 2008.

Based on the success of the first trial, when the integrated ticket achieved a 10 percent market share, it was decided to extend the system to four additional corridors. The trial was then transformed into a commercial service, with all stakeholders (the national railway, local transport operator and Krakow authorities) extremely confident about the success of the partnership.