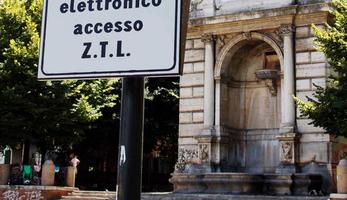 Limiting access by private vehicles to sensitive city-centre areas improves mobility for all road users and promotes the use of sustainable transport modes.

The volume of traffic generated by the political administration, services and tourism, which are all concentrated in the historical centre of Rome, is damaging quality of life and air quality in the city. By creating a limited traffic zone, the aim was to reduce peak-hour traffic, cut the number of highly polluting vehicles in the city centre and encourage a modal split towards more sustainable modes of transportation.

In 2001, the municipality of Rome implemented a limited traffic zone with automatic access control in the centre of the city, covering an area of 4.8 km2. The control system comprised 23 electronic access gates, and restrictions applied between 06:30 and 18:00 on weekdays and 14:00 to 18:00 on Saturdays. The gates are fitted with automatic number plate recognition technology to monitor whether or not each vehicle is permitted to enter the zone and to automatically issue fines for violations.

Following the success of this initial trial, the scheme was enlarged in 2007, when five additional sensitive areas were identified. Restriction periods were introduced and a further 22 electronic access gates were installed at the entry points, making a total of 45 gates controlling access to an area of around 10 km2. Variable message signs were also installed near the gates, informing drivers about the restrictions. Access is permitted to residents of the zone and to certain other categories of users who pay an annual fee for an entry permit. The revenue from the fee and from fines for violations is used to fund new investments in city public transport services.

As a result of the measure, Rome has the largest restricted access area in Europe after London. The main outcomes of the access restriction policy were: