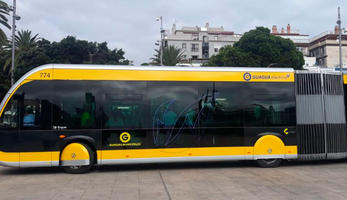 A call to supply hybrid buses was issued in June 2017, but there were no suitable candidates. The specifications were revised and modified and the tender relaunched.

The contract was finally awarded in December 2017 to Vectia Mobility. They supplied Guaguas Municipales with 3 Veris.12 buses; these came into service in September 2018.

Guaguas Municipales has been training all its drivers and maintenance staff in the new hybrid buses to ensure the vehicles' technological benefits are fully exploited.

After one year in operation, each bus had covered about 45,000 km. They have mainly served the three bus lines 1, 2 and 17, services which take passengers to major destinations in the city.

In May 2019, a new fully electric bus (developed by Irizar) started in the fleet.

In its first phase of operation over the summer, four drivers tested the vehicle along different lines where articulated buses currently run. This first phase was conducted without passengers.

The second phase, which took place during European Mobility Week in September 2019, saw the vehicle start carrying passengers. It served various lines, but only during the morning/afternoon (from 10:00 to 13:00).

In the third phase, which started in October 2019, the service has been extended to run throughout the whole week during both the morning and evening.

During all these testing phases, a team of engineers has been checking the parameters of the e-bus. This is helping Guaguas Municipales to determine which line would most benefit from the e-bus.

The data collected will also help decide which technology to use for the future Bus Rapid Transit.

The measure is in operation and data for evaluation are being collected.

Ultimately, the measure is an important step towards Guaguas Municipales becoming a truly sustainable and eco-friendly urban public transport company.