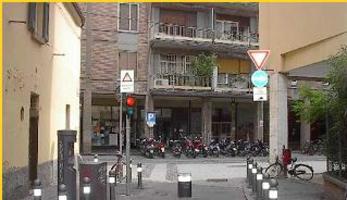 Bologna has installed electronic pillars around semi-pedestrian areas within the limited traffic zone (LTZ) in 2000. To improve the system, Bologna wants to develop new software and update the mechanic features of the system. It will be connected to the database for the vehicle pass that grants access to the LTZ. Cameras will record licence plates of the vehicles that enter the LTZ and fine car owners that are not on the authorised car list.

The main objectives of the measure are:

The limited traffic zone was set up to protect historical and prestigious places in the city centre. There are currently 23 pillars at entry points to eight semi-pedestrian areas. They are active 24 hours a day and are automatically lowered from 6:00 to 10:30 and from 15:30 to 16:30 for freight delivery vehicles. The time slots can be adjusted, for example when there are events or construction works.

Bologna has improved access control to 8 semipedestrian zones within the LTZ, which are protected by 23 electronic pillars, with a new IT system that allows for flexible access. The measure was kicked off  in late 2010. The new elected administration in May 2011 decided to start a system revision program to update the technology to protect the city centre from unauthorised accesses and improve the access flexibility. After being awarded the public bid to realize the new software in July 2011, the winner company  has produced the new software that in February 2012 was tested on one electronic pillar and in April extended to all the other ones. The updated system has been operative since the middle of May 2012. Under the new scheme, smart cards allow residents and taxi drivers 24-hour access. Commercial activities can be carried out with the smart card between 6:00 and 10:00 during work days. Institutional users, such as the police, public services and ambulances, are allowed to access the areas through a multi-password system to prevent illegitimate use as passwords are disseminated. Different institutional categories each have different passwords, which make it easier to track down illegal access and change the passwords. Moreover, the pillars can be lowered following calls from phones installed on an electronic column at the roadside at the entry point. The phone can be used for emergency calls and to reach hotels and car parks located in the area. Hotel clients and urban public services can also enter the area with a code that they receive on their mobile phones. Siren-sensitive sensors will automatically let emergency vehicles pass and a radio frequency system will lower the pillars when it detects the radio frequency used by firemen. The system has been integrated with Bologna’s new mobility multiservice smart card (named “MI MUOVO”), introduced under CIVITAS MIMOSA, that encompasses different services (e.g. public transport, electronic pillar management, car sharing, parking fee payments).   It is  also compatible with  Calypso protocol, an international electronic ticketing standard for microprocessor contactless smart cards. Together with ATC/TPER 3,000 Calypso smart cards have been distributed to residents and parking space holders to substitute the old ones. A communication campaign has been carried out in the form of letters sent to citizens (around 3000 people including residents and parking space owners)  to explain how the new electronic pillar system works. Since the measure aimed to introduce new access services for the residents of the inner-city semi-pedestrian areas, the measure was evaluated considering the number of complaints/suggestions recorded. Moreover a user satisfaction survey was carried out in September and October 2012 to assess whether the introduction of the new smart card has promoted PT use among residents. Bologna intends also to elaborate statistics referred to the access to pedestrian areas.

In measure's designing, Bologna expected that the new IT system would have reduced vehicle access to pedestrian areas by 15 percent due to a decrease in unauthorised access.

As far as the measure effectiveness in controlling access to limited zones is concerned, the results show significant differences. Between 2009 and 2012, there was a 42% reduction in access to limited zones with multiple passwords recorded, meaning that around 250 fewer vehicles entered the zones each  week day. This is probably due to the fact that in the past multiple passwords were improperly used by unauthorised people, while the new system, which uses personalised passwords, allows the local administration to track citizens responsible for any misuse. A satisfaction questionnaire was produced to determine whether  the implementation of the measure really had  improved and facilitated access for the authorised users. 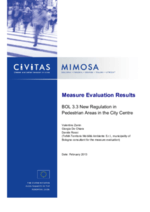 New Regulation in Pedestrian Areas in the City Centre