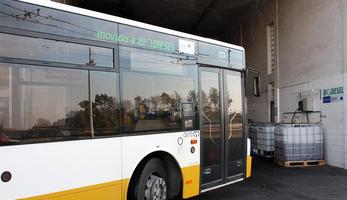 SMTUC, the public transportation operator in Coimbra, has tested different mixes of biodiesel in four buses under real operating conditions. By doing so, information on energy consumption and atmospheric pollution caused by emissions, as well as percentages of biodiesel tolerated by the conventional engines were collected. Furthermore, a cost-benefit analysis was carried out on the use of biodiesel versus conventional diesel. CIVITAS being a demonstration project, this measure was not be limited to a “laboratory analysis,” moreover a full-scale experimentation on regular public service lines were carried out.

During the first phase of the measure, the test parameters were established. The second phase focused on the training of the personnel that coordinate and carried out the trials, the preparation of the space and the installation of the equipment needed for the tests.

The trial phase itself was divided into three stages, in which the different fuel mixtures were tested. The first test examined a mix of 30%. The level was increased by 10 percent in each stage until a maximum of 50 percent - i.e., 30 percent (B30), 40 percent (B40), and 50 percent (B50) biodiesel mix. Fuel mix tests were conducted every 25 thousand km (roughly five months), which coincided with the scheduled maintenances of the fleet.

The testing parameters for stage one of the measure, including the data assessment methodology and equipment, have all been established and acquired. After prospecting the market availability for biodiesel, a supplier for the test phase was selected.

In early 2011, the installation of the necessary equipment was terminated and the trials were initiated with 30 percent mix on four buses. However, in early May, the two buses equipped with common-rail technology for the diesel injection revealed problems in the feed system which forced the suspension of the trial on these two units. More precisely, an examination of the filters and injectors revealed a concentration of a gel-like substance.

The other two buses continued the trial without any problems and on 11 July they upgraded the mixture of biodiesel to 40 percent and after 25000 kms the mix was upgraded to 50%.

At every mixture upgrade tests were conducted to the trial vehicles. The yield tests were focused on the quality of lubricant oils (carried out by the lubricant oil supplier), fuel consumption evaluation, number of repairs and maintenance, performance evaluation (through driver survey on bus performance), and analysis of emissions.

The analysis at the end of the test period considered the quality of lubricant oils, fuel consumption, number of repairs and maintenance, performance evaluation, and emissions, and the following conclusions have been established:

• No perceptible problems occurred with the 4 buses that reached the objective of 50% of biofuel mix, during a running test period of 20 months and by covering about 100.000 km each one;

• The use of biofuel as a blend with diesel may lead to some changes in emissions, but for NOx, and CO2 the biofuel revealed in general only a marginal effect. For a B30 blend the savings in the CO and PM emissions will be 20%.

• In the future, if B30 will be used in all vehicles of the SMTUC bus fleet (100 vehicles), the total PM emissions of the fleet in a given year may decrease from about 2,4 tPM/year to 2,0 tPM/year, representing an overall reduction of approximately 17% in terms of PM abatement.

• The hypothetical introduction of B30 in the entire SMTUC bus fleet could represent savings in operating costs around 420.000 €/year and the replacement of approximately 268.000 litres of diesel.

Additionally, an important finding of the tests has been that buses with common rail technology are not suited for the use of biofuels.

The full-scale experimentation for the majority of the SMTUC bus fleet and on regular public service is under consideration. In case the response will be affirmative, priority will be given to using biofuel resulting from recycled oils, such as cooking oils from the university complexes and the two central hospitals. Contacts with the municipal waste management service are also being established to assess the possibility of collecting these oils in the future. 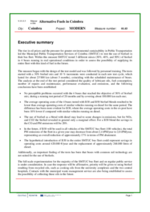