Development of dialogue displays at pedestrian crossings close to schools 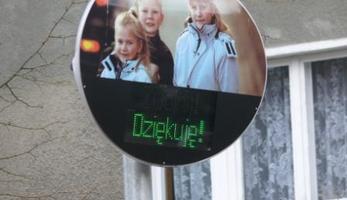 To improve safety conditions of school pupils in their way from and to school, through instalment of the dialogue displays before pedestrian crossings.

To ensure the road and traffic safety of pupils in their way to/from school as well as to raise acceptance of speed limits among car drivers and to reduce the number of collisions at pedestrian crossings.
Measure was also focused on enhancing the use of innovative traffic telematics system in a form of dialogue displays.
An important problem concerning the traffic in Szczecinek was the level of traffic safety around schools, situated close to the busy roads. At that moment there were no special tools slowing down the speed of the cars, and fix displays of speed limits at traffic signs were often ignored by drivers. Traffic lights were installed at only 3 intersections in the city, but they were not situated close to any of school. There was an urgent need to ensure the safety on the way to school for pupils, as the number of accidents was increasing. Already existing signs “Attention - Pupils” were not fulfilling their tasks - drivers were not willing to slow down.
In such situation reasonable solution seemed to be the dialogue displays system located close to the pedestrian crossings used by pupils on their way to/from school.

The location of traffic dialogue displays instalment was identified and the market was researched in context of possible solutions. Revision of Local plan of spatial development in terms of measure implementation was finished. The technical documentation was designed and construction permits obtained. Call for tender for dialogue displays constructor was published and evaluated.In 2009, three dialogue displays have been installed at two pedestrian crossings close to the schools in order to slow down the road traffic and to increase the traffic safety on the way to/from school for pupils.The Measure is being demonstrated to the public and will continue its operation also after the RENAISSANCE project end. The demonstration was being accompanied by dissemination activities in the context of the “safe-way-to-school” campaign.