Dedicated bus lanes / HOV lanes control with the use of ITS 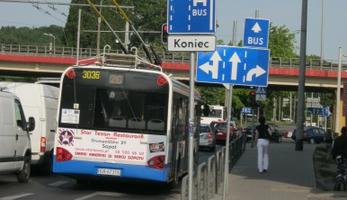 To increase the quality and the efficiency of public transport, three new dedicated bus lanes were implemented on two heavily congested arterial roads and one in the city centre. Also, a video camera system was installed on one  bus lanes detecting and enforcing drivers who use bus lanes without permission.

During rush hours (in the morning and in the afternoon) there was considerable congestion on Morska Street and Zwyciestwa Street. Before DYN@MO, there were no bus lanes on these arteries. It was expected that introducing bus lanes and controlling their correct use would increase the competitiveness of PT and decrease travel time during rush hours.

The first bus lanes in Gdynia has been implemented together with a device that detects vehicles which do not comply with the regulations. A concept of lanes has been developed for the city centre and two incoming roads into the city centre ­­– a section of Morska Street and Zwyciestwa Street. For this reason, the traffic model (developed within measure G3.1) was used. The concept points out the feasibility of such lanes, their location, advantages, costs, impact on traffic flow and the need for traffic reorganisation.

Based on the studies done in this context, the pilot project lane  has been chosen and implemented within CIVITAS-DYN@MO. The pilot project included the installation of a device detecting vehicles which use the bus lane and which do not comply with the regulations. Promotional activities were also planned within this task, including campaigns to raise awareness among drivers about the existence of the dedicated bus lanes and what happens if they do not comply with the regulations.

In the preparatory stage, the Gdansk University of Technology (GUT) has conducted an in-depth study for a pilot project lane which was implemented within CIVITAS DYN@MO. The concept of HOV lanes/ bus lanes for the city centre and two incoming roads into the city centre has been elaborated. For the other potential dedicated lanes conditions of implementation has been developed through a study. The study evaluated possibilities of completion of dedicated bus lanes, its location, advantages, costs, impact on traffic flow and the necessary reorganisation of traffic. This element, available also for taxi and other privileged vehicles has provided an important and decisive tool for the further reconstruction and modernisation of main streets in Gdynia, improving competitiveness of public transport.

As part of this measure, the City of Gdynia has prepared the tendering procedure for the technical documentation – based on the study, analysis and tests conducted by the Gdansk University of Technology. The preparation of the study has also been supported by consultations with local stakeholders to receive their approval.

During the implementation phase the following tasks has been executed by the City of Gdynia: 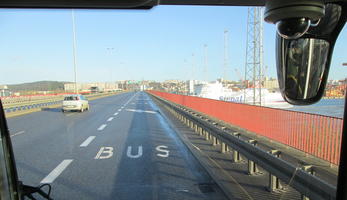 Introduction of HOV lanes in Gdynia

Within CIVITAS DYN@MO the City of Gdynia has developed three new lanes with priority for public transport vehicles (HOV lanes), one in the city centre and two connecting...