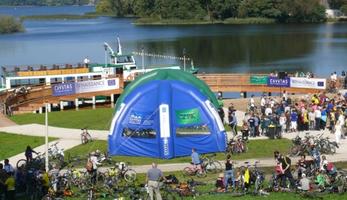 Complement the bicycle path system necessary for the development of the bicycle culture among citizens and tourists.

In Poland traveling by bike is still not as popular as it is in other Western European countries. However, we can observe a slow but gradual increase in the number of people using cycle paths.
Szczecinek is located in a favourable environment and set of measures was foreseen to stimulate the use of bicycles in urban transport.
Besides the increasing road safety at critical main road crossings, the establishment of renting points and bicycle parking facilities and a network for cycling was developed.

Location of Szczecinek between two lakes and near of forests creates very good conditions for development of the cycling. The city by itself is also situated along the historical park, which connects two sides of the city - in the length of around 4 km. The favourable location of the city could allow reaching any of its point by bicycle - cycling through the park along the lake and then to enter the city. That was the reason for the expansion of the bicycle path located in the park. As a result of the analysis 3 locations were selected as well as implemented to close the missing links in the Szczecinek cycle path. Over the past four years, except for bicycle paths built within the CIVITAS RENAISSANCE project, the Municipality of Szczecinek has built about 11 km of other bicycle paths, the County of Szczecinek approx. 4 km and the General Directorate of National Roads about 5 km of new tracks. Szczecinek is in the middle of the process of developing the cycle path system within the city. However there is no doubt about that the CIVITAS RENAISSANCE project and especially this measure had significant impact in stimulating the cycling development in Szczecinek.

Local spatial plan was revised, in order to locate the missing links in the bicycle path system. Number of consultation meetings with local road traffic department, conservationist and environmental protection officer were completed. Possible bicycle path network constructions - technical solutions analysis was executed. Technical documentation, designs, construction permits and procurement activities were performed. In 2010, first part of closing missing links in the bicycle path network 2,5 km long (equipped with lightning and recreational sites) was completed, 2 another path sections  (2,6 km and 0,9 km long) were constructed in 2011. The process of bicycle path expansion has been initiated by the CIVITAS RENAISSANCE project and will be continued over the next years.

By closing missing links in the network for cycling, and in combination with the other measures to stimulate the use of bicycles in Szczecinek, cycling has reached approximately 19,6% in the modal split of the urban traffic. More than 75% of Szczecinek society accepted this Measure. 87,2% of respondents claimed that the condition of newly constructed cycle paths is of good quality. 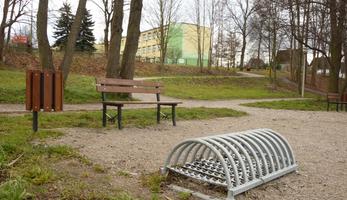 Szczecinek has closed the missing links and completed the last part of the city's new bicycle lane network that was implemented this year as part of CIVITAS RENAISSANCE....