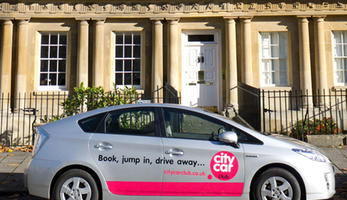 The City Car Club in Bath has been expanded, with the introduction of six alternative fuelled cars and new parking spaces.

Six new hybrid cars and their associated parking bays were introduced in Bath in association with partner organisation City Car Club, for use by businesses and residents throughout this World Heritage city. Car Club research shows that nearly half of members give up or defer purchase of a car and reduce their annual car mileage upon joining.

City Car Club first set up a car club scheme in Bath following the introduction of a successful scheme in the neighbouring city of Bristol introduced as part of the CIVITAS I VIVALDI project.

An alternative fuelled vehicle, the hybrid Toyota Prius, was identified and locations for six new car club parking bays selected. Traffic Regulation Orders were put into place for these new bays prior to the delivery of the hybrid cars.

The demonstration project commenced on 22nd April 2010. Six new Toyota Prius hybrid cars were introduced into Bath, together with six new parking bays and associated signage. Although the trial ended on 31st March 2012, the hybrid vehicles continue to operate in Bath and similar hybrid cars have been introduced in other UK cities where City Car Club operates.

• City Car Club fleet in Bath increased from 6 to 12 cars • Membership of the City Car Club in Bath increased from 97 members in 2007 to 418 in 2012, 331% (Target 100%) • Overall fuel economy, emission levels  and availability is better than existing cars in the fleet, although lease costs are higher . • 75% of CCC members were positive or very positive about the introduction of the Toyota hybrid