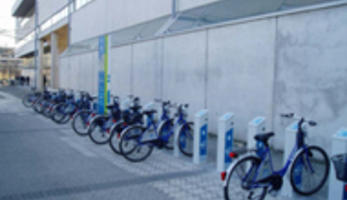 Donostia-San Sebastian is seeing a constantly growing number of cycling trips in the city. To maintain this trend, the municipality introduced a public bike-sharing scheme.

Donostia-San Sebastian sees the public bike sharing service as an indispensible next step to strengthen the city’s growing cycling culture. The goal of this measure was to increase the cycling culture by providing those who do not own a bicycle the opportunity to use this mode for their daily trips. In particular, it is expected that non-cyclists use the bike scheme for occasional unplanned trips and/or as an access mode to other transport services (intermodal trips).
The main objective of the measure was:

The public bike service was launched in 2009. At the beginning, the service consisted of 100 public bikes at five locations. The service drew 200 users a day. In July 2010, four additional dispatch points were opened and the number of bikes increased to 150. Since then, tourists and visitors can make use of the scheme, as well. While residents can become a member for €20 a year, non-residents can obtain a day pass for €8, a three-day pass for €15 or a week-pass for €25.

The system requires registration, after which the user receives a magnetic card that allows making use of the bicycles at the dispatching points. This way, the system can track the usage of the bicycles, including the name of the user, who remains responsible if the bicycle stolen, vandalised or damaged in any way. In these cases the users are charged a penalty fee.

During the first hour the service is free. The user pays 1 € for the next second hour and 3 € for the third and fourth hour, being the use of the system limited to a maximum of 4 hours. Penalty fees and service restrictions are foreseen for delayed users. The public bike-sharing service is available between 7:30 am and 9:00 pm everyday of the week, 52 weeks a year, with only 3 days per year in which the service is not working.

Currently, the city is considering the expansion of the service to more areas in the city as well as the possibility of extending the service hours.

During the project life, the number of registered users increased every year, reaching 5,006 subscribers in 2011, when the four additional dispatch points and 50 additional bicycles started operating. The number of trips made with city bikes increased 50 percent in 2010 compared to the previous year, while in 2011 this yearly increase was 64 percent as compared to 2010.

This means that registered users are gradually getting used to the service for their daily trips in the city, reducing the use of the car and using the bicycle as element of intermodality with public transport. Also the number of uses per bicycle per day increased since the system started operating, from 1.84 uses per bike per day in 2009 to 4.59 uses per bike per day in 2011. The majority of the uses had a duration under 15 minutes and were made during weekdays, which means that the service is being used mostly for daily mobility in the city and less for leisure.

The impact of the measure stimulated city bicycle users to also make more use of their own cycles. Among the users of city bikes in 2011 there was an increase of 25 percent of movements with private bicycle, as compared to 2010. 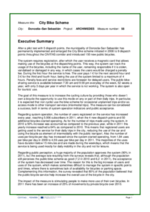 Go shopping on your bicycle in Donostia-San Sebastián!

To promote cycling as a regular means of transport for shopping, the city of Donostia-San Sebastián, is giving away 170 free bicycles to people that shop in the...