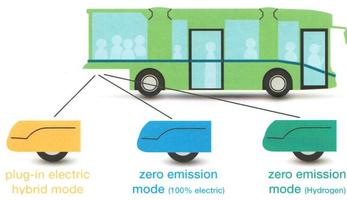 This measure will study alternative energy sources from solar and wind farms for charging electric buses.

It will take into account the complexity of factors related to the production, distribution, and use of power from intermittent sources for clean and efficient transport systems in the City of Constanta by generating a synergic effect between the Port of Constanta and the city.

The first step will be to evaluate existing solar and wind farms in Constanta's metropolitan area, their technological specifications, energy output, and development plans.

The potential to generate wind and solar power in the Port of Constanta using the port’s infrastructure, such as port water breaks, solar PV panels installed on port roofs, and other similar opportunities will be evaluated.

Arguments for using this power output for transport systems will be identified. Power distribution and connectivity between the port and the city will be evaluated to facilitate the direct use of electricity without the cost of transport and taxes.

The second phase will be a feasibility study focusing on integrating renewable energy sources and transport modes in the city and Port of Constanta.

The third step will be a professional feasibility study regarding creating a line of electric buses in the Port of Constanta, with charging units based on solar and wind energy.

At the moment, the case for electric buses being introduced is mainly an environmental one. Accordingly, transport companies expect financial support for the introduction...