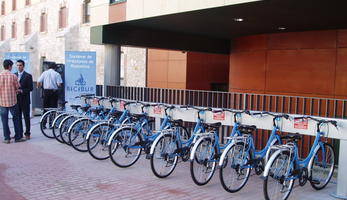 As a way of promoting bicycle use, a bicycle loan scheme was established to provide easy access to visitors and residents.

During the 1990s, cycling as a means of daily transport was virtually non-existent in Burgos. Although 60 percent of the population were bicycle owners, cycling was regarded as a weekend or leisure-time activity. Nevertheless, the topography and layout of the city are ideal for bicycle use: it is flat, with plenty of wide avenues and green spaces. Some of the reasons for the low modal share of cycling were pinpointed in a 2003 survey. They included the incomplete cycle path network, low temperatures (Burgos is located at an altitude of 856 m with average daily temperatures in winter of 5oC), and the common perception of cycling as something for young people and students.

The measure was therefore designed to increase bicycle use in the city among students and commuters, and to install suitable infrastructure for a bicycle loan scheme. The promotion of cycling as a cleaner form of daily transportation would have social, health and environmental benefits.

An earlier bicycle loan scheme had been developed by the university, which had acquired a number of bicycles to loan to teaching staff and personnel. In contrast, the new scheme was aimed at all citizens of Burgos in order to encourage them to use bicycles as an alternative means of transport, especially for trips in the city’s “clean zones”, where restricted access does not apply to bicycles.

The BICIBUR scheme was launched in March 2006 with an ambitious plan put forward by the city council to offer members of the public the possibility of using a bicycle without charge for a few hours to travel around the city. A total of 400 bicycles were available to the public, with the aim of preventing the use of private vehicles and reduce pollution and congestion. The city council was responsible for designing and developing the system, including the bike loan points controlled by smart card, with the help of cycling and neighbourhood associations. The locations of the bike points were chosen in view of the need for bicycles on a daily basis and criteria included road occupation, pedestrian passage, electrical network and Internet access. The system comprises a computerised user point that reads the user’s smart card and provides information on the bicycles that are available, how to get round the city by bike, and how to lock and unlock bicycles and use the bike racks. All bikes are fitted with an intelligent recognition system.

The scheme was launched with an event attended by the mayor of Burgos and representatives of the regional government. A marketing campaign was also organised, including gifts for the scheme’s first members, promotional leaflets and a map of the city’s bike path network. The scheme was given widespread media coverage.

The bike-loan system started with four installations around the city, each with 15 bicycles. Between 2006 and 2008, the system registered over 3,100 members and loaned out over 20,000 bikes. Due to its widespread success, the system was extended to include 16 bike-loan pick-up points, one for each area or neighbourhood in Burgos. The system also offers 20 electric bicycles for longer trips mainly centred on travel to the industrial zones.

Citizens can use the service for a maximum of two hours. Tourists are permitted to use the bikes for three hours to travel around the city in a sustainable way. The organisation in charge of maintaining the bicycles and redistributing them during the
day is a social organisation (Fundacion Lesmes, also belonging to the municipality), made up of socially excluded groups and people with disabilities.

To complement the scheme, an additional 15 km of new bike lanes were constructed in the city, bike parking was installed, and maps of bike paths were provided. 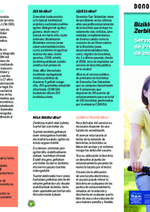 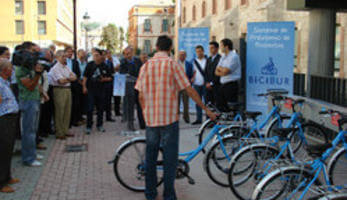 Local and Regional Politicians attended the inauguration of “BiCiBUR”, the completely new bicycle renting system in the region of Burgos. This initiative is...