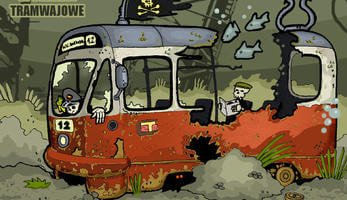 To improve perceived and actual safety in its public transport system, Gdansk decided to install a video surveillance system and develop alternative ways to deal with offenders.

Vandalism is a problem in many large cities. Gdansk addressed this through a measure that aims to reduce acts of vandalism and bad behaviour in public transport and public transport areas. The objectives of the measure are to: • Enhance and promote the use of public transport by improving the actual and perceived level of security; • Increase the modal split towards sustainable modes; • Reduce acts of bad behaviour and vandalism; and • Develop a new strategy for liaisons between public transport drivers, the police, the PT operating company and the city hall. The measure consists of an assessment of the current situation to identify key areas to protect from vandalism and bad behaviour. Video surveillance systems help to prevent and intervene in misconduct. The city also collaborates with police, schools and other authorities to develop methods to improve PT users’ perception of safety and security.

The measure started off with a baseline study that determined the type, level and cost of vandalism. The assessment was completed in 2009. Based on this, the city identified areas for implementation. In 2010, Gdansk purchased 50 video cameras sets that were installed on a rolling basis at bus and tram stops, interchanges and tunnels in the city centre The measure ´Safety and Security – Anti Vandalism´ aimed at enhancing the image of safe and friendly transport infrastructure in the city of Gdansk. The specific objectives are to increase citizens’ acceptance for public transport, to decrease the vandalism rate in vehicles and at public transport stops and to increase therefore the perception of safety and security of public transport users. The main assumption adopted for the measure is the stimulation of public transport development by continual improvement of public safety and tighter security measures in vehicles and at stops. Actions taken during the project time span were very diverse and addressed to different groups of stakeholders. They cover a range of undertakings: - 50  CCTV monitoring sets were installed at tram and bus stops, transport hubs and an underpass in the city centre within MIMOSA project and 50 financed by the city; - “Training for Trainers” workshop for PT drivers and dispatchers based on materials from CCTV on dealing with misbehaviour and vandalism in public transport modes; - Clean PT Stops” campaign (from  June 26, 2011 to  July 03, 2012) which included purchase and installation of 72 advert boards in order to provide an alternative to PT stop shelters being covered by illegal adverts and extended media campaign, promotional events and educational activities addressed to schoolchildren; - Improvement of safety infrastructure at PT stops – 16 bright yellow concrete safety bumps; - Lessons for school children on Anti-Vandalism; - Painting competition for primary schools in Gdansk on designing a road sign  "STOP  Vandalism”

Measure resulted in a decrease of number of acts of vandalism by more than 20% as compared with 2009. Perceived  sense of safety and security  of PT users increased by nearly 25%. “Training for Trainers” workshop ”How to deal with misbehaviour in PT and problematic passengers" has a long term impact on interpersonal skills of PT drivers. Training materials including short films from CCTV showing acts of vandalism and misbehaviour were used for providing instructions on how to deal with misbehaviour of PT passengers, especially those committing acts of vandalism and will be used in future. The installation of 50 CCTV sets on PT stops within MIMOSA and further 50 financed by the city goes along with Gdansk policy on safety and security . The “Clean PT Stops” campaign was a Poland-scale innovation. It was high appreciated by the City Council which provide additional funds for continuation of the action in other districts. 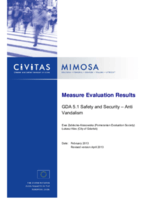