Advancing towards a dynamic SUMP 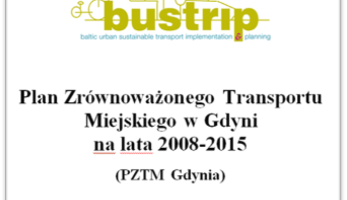 Gdynia ventured into sustainable urban mobility planning many years ago. This measure was supposed to consolidate existing urban and transport planning frameworks and use modelling and information technologies to develop a new Sustainable Urban Mobility Plan (SUMP). Web 2.0 applications has facilitated active participation of citizens and enhance the involvement of relevant stakeholders in the planning process. The result was a legalised comprehensive SUMP which serves as a model for cities in Poland and the Baltic region.

Although Poland has a well-established planning culture and espouses cross-sectoral approaches, active involvement of citizens and stakeholders is a novelty in Polish cities. Updating and further developing the existing planning documents towards a true SUMP for Gdynia served as an example for other cities in the country. It helps to define the requirements and conditions for the introduced compulsory sustainable urban mobility plans in these cities. The use of ICT based tools for data collection, modelling and public sharing of information is an innovative aspect in the measure. This was mainly  done through measures G1.2 Community projects from SUMP, G3.1 Traffic model development to expand Gdynia's SUMP and G3.4 Mobility 2.0 communication.

In 2007, as a result of the European project BUSTRIP, Gdynia developed a Sustainable Urban Transport Plan (SUTP) for 2008-2015. Although the plan was not finished and formally adopted by the City Council, it serves as an important working document. It addresses the actions, activities and measures which are necessary to establish a sustainable urban transport system in Gdynia as part of the Tri-City. This SUTPneeded to be updated, extended and approved by City Council as an official SUMP for Gdynia.

The following tasks supported the work on the SUMP:

Due to the necessity to elaborate and ratify the SUMP, the activities and their timeframe within the plan, estimation of costs and the way of financing was discussed. Consultations with stakeholders and the local community took place. Community consultations were held within the framework of measure G3.4 Mobility 2.0 communication (on the basis of such tools

as internet platform, internet for social communities and online surveys with the local community) which has significantly contribute to the SUMP elaboration.

For the purposes of setting the objectives, a self-assessment was conducted. Based on its results and on consultations with stakeholders, the priorities were established for Gdynia’s mobility strategy. Gdynia has prepared a long-term strategy and short-term action plan which will be monitored and updated every 2-3 years.

At the end, the acceptance and approval of the SUMP on the local level took place so that it becomes a legal document approved by the City Council. As a result, the legal document – SUMP for Gdynia including an action plan with timetable for tasks – the allocation of financial means and the responsible bodies were elaborated to enable full implementation of the SUMP.

The implementation phase involved the following: