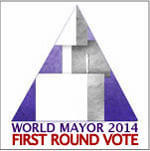 The City Mayors Foundation invites the international public to nominate candidates for the 2014 World Mayor Prize. Nominations will be accepted until the middle of May 2014.

The Prize is awarded every two years to a mayor who has made outstanding contributions to his / her community and has developed a vision for urban living and working that is relevant to towns and cities across the world. Nominations can be submitted until May 2014.

Previous winners and runners-up include:

The City Mayors Foundation is now seeking nominations for this year¹s Prize. It is looking for candidates who have made outstanding contributions to their communities and
have developed visions for urban living and working that are relevant to towns and cities across the world.

The World Mayor Project aims to raise the profile of mayors worldwide and honour those who have served their communities well and who have made contributions to the well-being of cities nationally and internationally.