Workshop about ideas for the Cycle Motorway in Aalborg 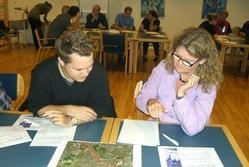 On 28 September the city of Aalborg hosted a workshop focusing on discussing and developing ideas for the planned Cycle Motorway connecting the city centre and University Area.

Creativity and engagement were the goals as Aalborg invited selected stakeholders to have a say in choosing which initiatives will be developed for the cycle motorway. The purpose of the workshop was to develop new ideas for the stretch and to get the input of bicycle user on existing ideas for the stretch.The participants represented a broad range of groups engaged in bicycle matters; from the students that bike to the university on a daily basis to the traffic police. Furthermore, a range of professionals from the city of Aalborg, each involved with bicycle planning in a different way participated in the workshop.The engaging discussions during the workshop resulted in the development of several new ideas for the cycle motorway. In addition, the participants had valuable inputs to the improvement of some of the initiatives already discussed for the cycle motorway. During winter 2009-2010 these ideas will be further discussed and improved, as the planning of the cycle motorway will proceed.