Winners of the CIVITAS Award 2006 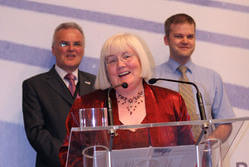 The CIVITAS award winners were officially announced during a dinner ceremony at the CIVITAS Forum, moderated by Ms. Maria Alfayate from DG TREN (European Commission). Winners were selected by a panel of experts that applauded all initiatives undertaken by the various applicants.Great ambassador of the CIVITAS initiative, the City of Malmö has successfully implemented a partnership with local dairy and bus companies for the enlargement of their vehicle fleet with biogas compatible engines. Together with the introduction of incentives for owning clean vehicles and the creation of low emission zones, this will foster private environmental car ownership and reduce the negative effect of car use on the environment. Mobility Management is high on Malmö’s agenda, who actively promoted itself as a bicycle city creating informative booklets and working in close collaboration with local commerce, industries and schools to achieve a traffic environment that is both environmentally sustainable as well as financially competitive.The City of Stockholm has implemented many ambitious measures in different policy fields, notably reaching a market breakthrough for clean vehicles and fuels and introducing 30 km/h speed limit in all residential streets in the city. Other transport measures such as the congestion charges or the improvement of the public transport system lead to the creation of a more sustainable urban transport system in Stockholm. The City is also involved in an international cooperation that allows a continuous exchange of information with other cities engaged in related fields of action.Three ambitious transport measures were implemented in the City of Preston, which had a positive effect on the City every day mobility. A new bus service was implemented that required infrastructure works in order to give bus priorities across the route and improve passenger waiting facilities. The TravelSmart project addresses the cultural factors by providing individualised travel marketing to those households who are open to modal shift for some of the journeys made each week. The City also entered a partnership with the University for enhancing pedestrian, cycling and public transport networks near the University area.