Winners of the CIVITAS Award 2005 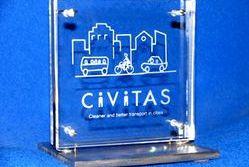 For the second consecutive year, the CIVITAS Initiative presented the members of the CIVITAS Forum with the possibility to win one of three CIVITAS Awards. The Awards drew as many as 16 cities into the contest, thus confirming that their value is fully recognised by European cities. The quality of applications proved consistently high, prompting true - though healthy - competition.

The following cities ultimately emerged as winners from the voting process:Implementing Sustainable Transport Policies – City running a CIVITAS projectWinner: City of KAUNASThe city of Kaunas has been working toward an ambitious sustainable transport policy that has been able to turn around the local urban environment. The effort is all the more remarkable if one considers the difficult post soviet conditions in which Kaunas was no longer than 10 years ago. Noteworthy accomplishments of the local strategic plan include the thorough modernisation of the public transport fleet, the introduction of electric vehicles, the development of a bicycle network, the involvement of citizens in service improvement and the promotion of public-private partnership for service provision. A key success factor in Kaunas is the strong and continuously won political support, comprehensive evaluation and monitoring campaigns that have always backed policy implementation, and the increasing exposure of the city to European policies, programmes and experiences.Implementing Sustainable Transport Policies - City not running a CIVITAS projectWinner: City of DRESDENThe defining element of the city of Dresden is a clear political vision that has been consistently supported by a broad partnership of local institutions. This winning combination has enabled the city to accomplish many of its transport policy ambitions and to continuously monitor results throughout the process. Remarkable examples of the projects undertaken by Dresden include an innovative tram-based freight delivery, an award winning disabled-friendly public transport system, and a state of the art public transport fare integration. CIVITAS City of the YearWinner: City of BREMENThe city of Bremen has lived up to the expectations of a true CIVITAS ambassador successfully covering all the 8 main policy pillars of the CIVITAS initiative. The trademark Bremen approach is traditionally founded on an active networking and a frantic exchange of information, which has involved cities and citizens at local, national and European level. What really strikes is the ability of Bremen to share its vast experience in promoting a new mobility culture through the presentation of good examples but also problems and obstacles. In doing so, the city likes to resort to innovative and unconventional communications means such the recent “James Bond” inspired public transport campaign.