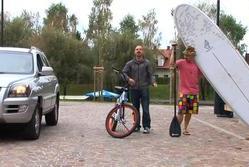 The most successful communication tools, used to promote CIVITAS ELAN, are two entertaining, yet educational videos about sustainable modes of transport. The videos were launched last year and have proven extremely popular with viewers.

The first video called “Bicycle vs. Car” was launched in September 2010 and explains the benefits of cycling in urban areas. By February, it had almost 19.000 views, which is far more than expected! Why? Check out the video here.Unfortunately, it is in Slovene, but the moving pictures speak a thousand words. The video even gained international popularity, as it was posted on the website www.copenhagenize.com.Another video was produced in November 2010 and shows a race between a car driver, cyclist and a surfer - presenting the challenges they are facing, using a specific mode of transport. Who was the winner? You can find out on www.civitasljubljana.si