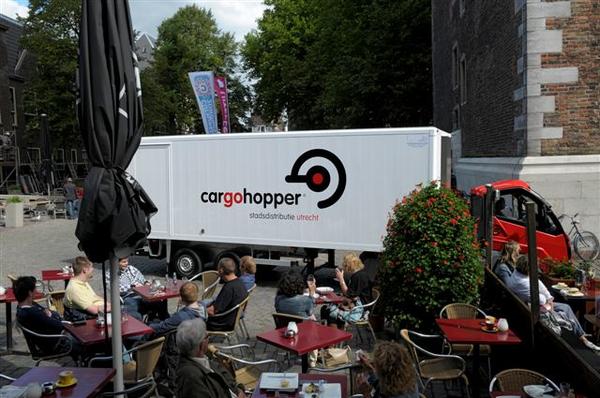 Building on the success of Cargohopper I, the transport company Hoek has just launched Cargohopper II, the 2nd generation solar powered electric distribution trailer capable of covering a wider area in and around city of Utrecht.

Designed to carry heavier and bigger loads than its predecessor, the new version Cargohopper II also comes with the added features of a larger action radius and faster speeds. It is now delivering to supply stores in the outskirts of Utrecht and even the surrounding cities. Cargohopper II is also used for the assembly and delivery of construction materials to build the new central train station and other construction projects in the centre of Utrecht. The Cargohopper project represents a quality city distribution system partnership model where the transport company, government and commercial trade work successfully together. The city of Utrecht for its part facilitates a location for the distribution centre and allows the Cargohopper to drive outside time windows within the environmental zones for the delivery of goods. Vice mayor of Utrecht Frits Lintmeijer commented: 'We were proud that Utrecht in 2009 had the scoop of the first Cargohopper in the Netherlands. With the launch of Cargohopper ll we can conclude that it is a lasting innovative concept for sustainable freight traffic.' Cargohopper l will continue to deliver cargo from the distribution centre towards the inner-city of Utrecht. It is a clean, quiet and fast system.