Two birds with one stone at CIVITAS Day in Ljubljana: Education and fun! 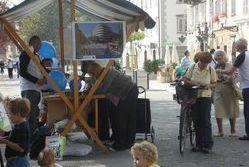 European Mobility Week reached its high peak on Saturday, 19 September, at least for CIVITAS ELAN partners in Ljubljana. Blue and white CIVITAS balloons took over the city, as the group organised a CIVITAS Day. The Mayor of Ljubljana Zoran Janković came to express support for our joint effort - cleaner and better transport in the city.

The CIVITAS ELAN group organised two info-points, where they informed people about the project. They lured people with practical gifts and an interesting photo-montage of the main street, Slovenska cesta, which is open for all motorized vehicles. The picture shows this area as a future pedestrian district with a special passage for buses, cycling route and green area, but without cars. In an opinion poll people were asked whether they like the picture and the idea behind it and the good news is that a great majority was in favor. Meanwhile, other interesting activities were carried out by CIVITAS partners. Representatives of the Regional Environmental Center of Slovenia were leading a cycling tour through Ljubljana's centrally located sights designed by the internationally famed Slovenian architect Jože Ple&#269 nik. Results of a public opinion poll about changing public transport in Ljubljana and its urban region were presented to the public by the Faculty of Social Sciences, University of Ljubljana. Also, the representative of the Urban Planning Institute of the Republic of Slovenia interpreted the exhibition of planned themed paths with reduced speed zones in the capital.CIVITAS Day passed not only in an educational atmosphere, but had a fun vibe as well. There was an exhibition of children’s paintings titled “Ljubljana without a car in children’s eyes and a creative workshop for young by-passers. While children were expressing their artistic views on traffic and transportation, grown-ups had a chance to try electric personal transporters -Segways.