Trieste takes to the streets to develop its SUMP 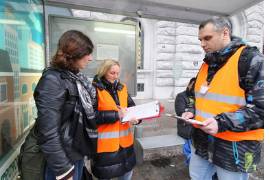 Thousands of local residents in Trieste (Italy) will be hearing first-hand about the town’s ambitious plans for a sustainable mobility future as the municipality takes to the streets with a SUMP task force and major information campaign.

Trieste’s “Traffic Plan 4.0” – as the latest iteration of the city’s mobility plan has become known - will see the light of day by the end of 2019.

This forms part of the city’s ambitious Sustainable Urban Mobility Plan (SUMP). But what makes this SUMP special is the extent to which the citizens of the Italian city will contribute directly to the plan and how it is defined.

The catalyst for this operation? A task force that will carry out thousands of interviews at the town’s bus stops and on the very streets of Trieste; the idea being to involve about four per cent of residents – somewhere between eight and ten thousand people.

It is hoped that vulnerable road users and groups such as pedestrians, cyclists, children and older people will be prominently featured in the consultation.

Other features of the campaign include reorganisation of the most dangerous crossing spots and regulation of heavy traffic throughout the metropolitan area. Services for tourists are also on the agenda; such as a bicycle rental scheme to improve tourists’ experience of the city centre.

Responding to the initiative, local councilor for urban planning Luisa Polli said: “This is the start of a path toward mobility – a broad concept that encompasses traffic (management), pedestrians and circulation of any means. We want to break free from the past with the adoption of this plan, adapting to the growing needs of this community.”h

Polli added that categories of citizen defined as “fragile” would be heard, with the goal of achieving real urban regeneration. “The city centre must also be enhanced through this review of mobility here, so its beauty can be appreciated.”

The municipality of Trieste is one of the five cities participating in CIVITAS PORTIS.

Find out more about its work in CIVITAS PORTIS here.